Did you know that cavemen can do parkour? That they hunt to the tune of “Tusk” by Fleetwood Mac as performed by the USC Trojans Marching Band? That there’s always one person in the family who’s curious and seeks new things even though the rest of the family buys into the whole “new is bad” thing?

If you’d seen The Croods, you’d know these things. And other things too.

The Croods, in case you’ve been living in a cave, is a new animated film about a family of cavemen who come face to face with the end of the world. You’ve pretty much met all the characters in other movies and even on sitcoms, so I’ll just skim over them for you:

In fact, Dreamworks has gone so far as to release these images of the characters. Because, y’know, they might as well bang the “we’re being formulaic!” drum as loud as possible. 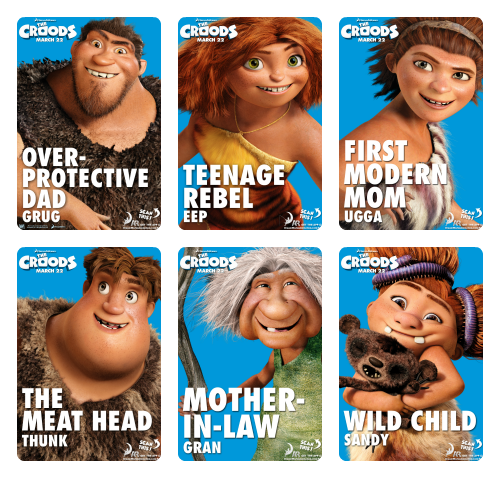 So the Croods are doing their thing, being afraid of stuff, looking for food, when Eep sees a strange light, sneaks out, and follows it. She finds Guy (Ryan Reynolds, Blade: Trinity), who has made fire, and his animal friend Belt (Chris Sanders, Lilo and Stitch). Before he leaves her to go on his way, he gives her a shell in case she needs him — oh, and he tells her that the world is ending. As you do.

Of course, the next day the world ends, Eep calls Guy, and thus begins an adventure to find safety — an adventure that includes the expected “dad gets all mad at the new person” and “dad and daughter can’t see eye to eye” and “touching reconciliation” and “dad takes many pratfalls” scenes we’ve all seen before.

I think you know how the movie ends. Instead of me telling you any more, let me tell you a few more things about the film:

I did ask my six-year-old daughter what she thought about the movie, but she wasn’t in the mood to talk. Still, she did enjoy Belt, and she got some laughs overall. She didn’t quite understand one of the climactic scenes when [SPOILER — go to rot13.com to decipher] Teht jnf guebjvat rirelbar npebff gur punfz — fur jbaqrerq jul rirelbar jnf fb fnq. Ng gung ntr V qba’g guvax xvqf gehyl pbzceruraq gur zrnavat bs frys-fnpevsvpr. [SPOILER]

Overall, I think this was a good film. It was written to hit certain emotional points, and it hit them. It was well-animated, well-directed, and pretty darn funny. I got a lot of laughs out of it, as did my daughter and everyone else in the theater. You’ll like it, as long as you can handle a somewhat formulaic plot.

Note to Parents: This film is aimed at kids. There’s mild crude humor, moderate violence (though mostly of the “ground blowing up” variety), and lots of scary moments. It should be okay for anyone elementary-school-age and up. Of course, you should use your own best judgment when it comes to your children.