So, as a fan of superhero stuff, I’ve been aware of Austin Grossman’s Soon I Will Be Invincible for quite some time. I got an electronic copy of it about a year ago and really wanted to read it, but I’ve been busy. Lots of books to read. 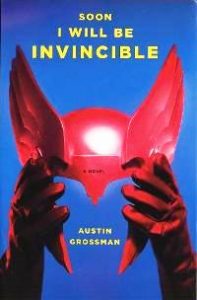 Soon I Will Be Invincible is the story of a superhero and a supervillain. The villain, Doctor Impossible, is the main character of the novel and in many ways is the protagonist, even though he’s a bad guy. Super-smart and super-strong (the latter due to various changes he’s undergone over the years), Impossible’s goal is to rule the world. He’s built several doomsday devices, but every time he gets close to winning, the superhero of the day — usually CoreFire, his nemesis — ruins things. Impossible is remarkably genre-aware; he realizes he monologues, he knows he has a tendency to lose at certain times, and he can see the flaws in his own plans.

The other half of the novel is told from the point of view of a new superhero, Fatale. She has no idea who she used to be before being turned into a six-foot-four 500-pound cyborg, but she knows that she has the power to do good, and so she joins the Champions — the current incarnation of the world’s greatest super-team. While Doctor Impossible is more about advancing the plot, Fatale’s chapters (the book alternates between the two) focus on the mechanics of Grossman’s world and the way superheroes function within it. I wasn’t expecting this side of things, and while I did like what happened in those chapters, I found myself more interested in Doctor Impossible.

The plot is pretty simple, when you get right down to it: Doctor Impossible wants to take over the world, and Fatale and the Champions want to stop him. But there’s an additional twist: CoreFire, Doctor Impossible’s aforementioned nemesis, is dead, and everyone’s blaming the doctor. Thing is, he didn’t do it, and honestly he’s pretty interested in finding out the culprit’s identity as well.

These days it’s almost impossible to write a superhero novel without a healthy dose of genre awareness, and although Soon I Will Be Invincible was released in 2007, Grossman knew what readers wanted and gave it to us. Nowhere is it more obvious in the scene where Doctor Impossible, sitting in a coffee shop, is accidentally seen by Blackwolf (one of the Champions) and he has to fight the entire team — Blackwolf (basically Batman), Damsel (daughter of a goddess), Rainbow Triumph (an enhanced teenager), Elphin (Titania’s last fairy left on Earth), Feral (a genetically-engineered cat person), and Mister Mystic (basically Zatanna with a little Dr. Fate thrown in)**. The Champions come at Impossible pretty much one at a time, and he manages to use his abilities to either defeat them or escape from them, commenting on the fight as he goes.

I generally found Soon I Will Be Invincible to be a fun entry into the superhero subgenre of fantasy novels. It was comic enough, with enough scenery-chewing, to keep my interest without going overboard. Doctor Impossible was someone I could easily root for. The story itself used enough tropes to avoid having to do major infodumps — although there were a few, including the quasi-cliche “watch a documentary video” section. Though the book is about six years old, there’s no anachronistic technology that pulled me out of the story, and with the exception of one small confusing thing at the end I was satisfied with the way the story wrapped up. I’d recommend this book to anyone who likes superheroes and anyone who likes to root for the villain.

Note to Parents: This book contains PG-rated violence and language. It should be okay for most teens to read. As far as I can recall, there’s virtually no sexual content beyond kissing, and no ultra-violence. Of course, you should use your own best judgment when it comes to your kids.

* It’s strangely telling that the only things I remember from that book are young Clark heat-visioning through his glasses and young Clark getting a spanking but not even feeling it because, y’know, he’s Superman.

** Fatale and Lily — Lily being Doctor Impossible’s ex-girlfriend, once evil, now working for the side of good — were following up on another lead at the time and therefore were not present.