This review contains somewhat-moderate spoilers for Oz the Great and Powerful, though I’ll try to obfuscate them as best I can.

Like many people, my first exposure to The Wizard of Oz was the Judy Garland film. However, my second exposure was the original L. Frank Baum novel series — my local library had a bunch of them, and I read them all. Then of course there was Wicked and its sequels, and the vastly-underappreciated Return to Oz.

This year will see the release of two Oz films — Dorothy of Oz, an animated feature, and the one that came out last Friday, Oz the Great and Powerful, which I saw.

It was a film that was on a screen. That’s about how well I can explain it. 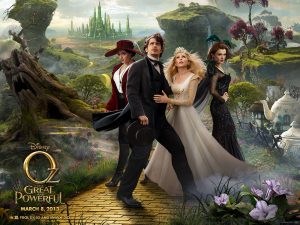 Oz the Great and Powerful is a prequel to The Wizard of Oz, intended to show us how the Wizard from the 1939 film (and the original book) got to the land of Oz in the first place. It turns out that he’s a small-time magician in a traveling circus, as well as a player and a bit of a charlatan, although what he really wants to be is a cross between Houdini and Edison (who he admires greatly). After playing the field with one too many circus women, Oscar Zoroaster* (“Oz”) Diggs escapes in the circus’s hot air balloon, right into the path of a tornado.

And we all know what happens then.

Oscar ends up in the land of Oz, right in front of a witch named Theodora, who explains to him that there was a prophecy and Oz is going to save the land from the Wicked Witch. As you do. Theodora brings Oscar to the Emerald City, where her sister Evanora is more or less in charge as the custodian to the throne. She sends Oscar to defeat the Wicked Witch… except that he finds Glinda instead, and we all know that Glinda is the Good Witch of the South. Glinda explains this, and then tells Oscar what’s really happening.

Oscar wants none of this. He’s not brave, and he’s not a real wizard. But Glinda knows he’s the only wizard they’ve got, and if she’s going to save the land of Oz, she’s going to have to convince him to rise to greatness… or, at the very least, goodness.

Oz the Great and Powerful stars James Franco (Spider-Man, Freaks and Geeks) as the titular character, and I have to admit that I don’t understand the casting choice. Franco is a good enough actor, but he comes off as a buffoon through most of the film. His smile is goofy at best, he overacts almost at a Jim Carrey level at times, and his voice just doesn’t work. At all. Not even in the climactic scenes when he’s supposed to be super-awesome. As an audiophile, voice casting is important to me, and Franco wasn’t the right choice.

The supporting cast includes Zach Braff (Scrubs) as Finley, the obligatory Disney talking animal character; Joey King (Ramona and Beezus, The Dark Knight Rises) as the China Girl; and Tony Cox (Bad Santa, The Hebrew Hammer) as Knuck, the herald of the Emerald City. Also in attendance are the great Bill Cobbs** (The Others, Things to Do in Denver When You’re Dead) and Bruce Campbell (Army of Darkness), and I could’ve sworn I saw David Jason (The Colour of Magic, Hogfather) among the tinkers, but his name isn’t in the credits or on IMDB so I may have been mistaken.

But the real stars of the film are the three witches: 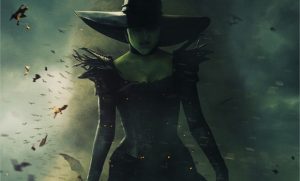 Speaking of the witches, without giving too much away, I will tell you that one of them is the green-skinned Wicked Witch that we all recognize. I will say that I felt the first appearance of the Wicked Witch was not only cliche but also poorly-shot. The actress who plays her absolutely nails Margaret Hamilton‘s cackle, I’ll give her that, but the makeup on the Wicked Witch is terrible (I don’t blame the actress) and I don’t love the writing around the character.

Now, I’ve been pretty charitable so far about the film, but there were a lot of problems with it to my eyes, and most of them were around the CG and compositing. Look, I get it: films like this, especially these days, depend upon CG to save money, but if you compare this film with The Wizard of Oz and even Return to Oz, the CG effects are obvious, overblown, and in many places (especially the parts with the China Girl) poorly-composited. If you compare the scenes where Oz picks up the China Girl to the scenes where Harry Potter interacts with Dobby even as far back as Chamber of Secrets, I can’t understand how Disney, one of the biggest studios on the planet, got these details so wrong. It was extremely distracting. 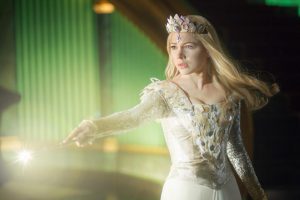 So, having said all of that, what did I think of Oz the Great and Powerful? Well, I liked it enough, that’s for sure. I think the plot was simplistic and the signposts in it were glaringly obvious. I think the acting was mostly good even if the casting of Franco wasn’t, and the callbacks to the Oz novels and the original film were cleverly done. The Wizard’s love of Thomas Edison shines through and is a good story point, and makes the Wizard a rounder, stronger character. I do think the film could’ve been made better in the writing phase, although given that it’s a Disney film it has to be made palatable to the biggest audience possible. I also think more time should’ve been spent on the CG, making it better-integrated and less blatantly-obvious. There were callbacks to Star Wars and Harry Potter that I both appreciated and looked askance at. The sequel hook is glaringly obvious even to children. I don’t think it was quite worth the $11 I spent on the ticket, but I would’ve been fine with $9.

Oh, and by the way — there were a couple of scenes that were quite obviously included for the 3D release of the film, and I think those needed to be cut from the 2D release (which is the one I saw).

See this movie if you think you’ll like it. Go into it positive and you’ll have a good time. Just try not to be too critical.

Note to Parents: This film is rated PG, but it’s Disney PG. There’s some violence, some mild torture, and a lot of moments intended to scare younger viewers. Also, a lot of kissing, but that’s as explicit as it gets. All teens will be fine with this film, and even younger kids should be okay as long as they’re not too easily scared. My daughter couldn’t handle this movie, but my friend’s five-year-old will be fine with it. Of course, you should use your own best judgment when it comes to your children.