The very first film I put into my Netflix instant queue was TiMER. At the time it seemed like a cute little sci-fi film. It sat there, right at the top of my queue, for… geez, must be two years now… before I finally decided that it was time to watch it.

So I did. And now I am reviewing it for you. 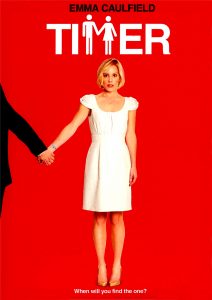 TiMER, released in 2010, is the story of Oona O’Leary, an orthodontist who’s just looking for Mr. Right. However, the world Oona inhabits is one where, for at least the past 20 years, people have been able to get an implant called a TiMER which counts down to the moment you meet your soulmate (and then chimes when the two of you lock eyes for the first time). Oona’s TiMER, however, is blank, which means that your soulmate doesn’t have one yet. So she spends her weekends going on dates with guys who don’t have them, convincing them to get TiMERs and then seeing if they’re her Mr. Right.

That’s really the entire genre aspect of the film — everything else is pretty standard romantic comedy fare.

Anyway, on a lark Oona gets together with a guy named Mikey who she thinks is on a countdown to meeting his soulmate — who isn’t her, as his TiMER says four months. They grow closer over time, until Oona and Mikey have to have a little face-off about his device.

Meanwhile, Oona’s half-sister Steph is out there dating guys with TiMERs to avoid thinking about the fact that she won’t meet her soulmate until she’s 43. Oona’s younger brother Jesse gets his TiMER and discovers his soulmate. Her mother and stepdad are pretty much standard mom-and-stepdad characters for this genre.

The cast of TiMER is led by Emma Caulfield (Buffy)* as Oona, who plays a version of her Anya character, albeit not socially-inept. I’m not sure how I feel about Caulfield as a romantic lead, but she performs well, especially in the climactic scenes. She’s joined by John Patrick Amedori (Gossip Girl) as Mikey, the younger man who she gives a chance; he struck me as sort of the Heath Ledger character in 10 Things I Hate About You, albeit not nearly as snarky. Michelle Borth (Tell Me You Love Me) is Steph, who fulfills the “attractive casual-sex-having two-job-doing female slacker” role. She does have some good lines, though. The bulk of the casting money, though, was probably spent on JoBeth Williams as Marion, Oona’s mom, who is every stereotypical “I want grandchildren and am a force of nature” mom in every romantic comedy everywhere. Her character did get a bit tiresome. Other cast members include Kali Rocha (Buffy) as the TiMER girl, John Ingle (General Hospital) as Dutch, and Muse Watson (NCIS, Prison Break) as Rick, Oona’s biological dad, in kind of a wasted role (I’m not really sure that his revelations couldn’t have been delivered by another character).

TiMER was written and directed by Jac Schaeffer, who, according to IMDB, hasn’t done much else. I found his direction adequate — nothing really jumped out at me, but nothing he did detracted from the film either. The writing was clever, but not much better than most romantic comedies. The music was composed by Andrew Kaiser, a journeyman probably best known for his work as an orchestrator and score coordinator on such films as Saved! and American Wedding. I definitely enjoyed the music used in the film, and appreciated the way he turned it into a character in some of the more humorous sequences.

Overall, I found TiMER to be a fun but ultimately average entry into the continuum of genre-tinged romantic comedy. Good acting all around, good direction, fairly good writing, and a clever premise — albeit somewhat underused. I think the point of the film was to make viewers think about what their lives would be like if they knew who their soulmates were simply by looking at a device on their wrists… but I didn’t think that hard about the movie. It was just a movie.

TiMER is currently available on Netflix Instant. You could find worse things to do than watch it.

Note to Parents: This film contains adult language (more than usual for a romantic comedy), sexual situations (nothing explicit), and mature situations. It is rated R, mostly for language. If you’re okay with your kids hearing adult language, then any kid capable of watching a PG-13 film should be capable of watching this one. Of course, you should use your own best judgment when it comes to your children.

* I swear I didn’t know it starred a Buffy alum until well after I’d finished watching the series. It’s just a coincidence.