Wow. How do I conclude 25 articles about TNG? I’ve talked about pretty much everything, haven’t I?

The day before I wrote this conclusion, I went to a meeting at my daughter’s school and it reminded me of how, when I was still a student, a lot of chapters or books had suggestions for further reading. Thing is, I’ve already told you about the tie-in novels. But where can you go if you haven’t had your fill of TNG?

I’ve got some suggestions.

Let’s start with fan films. In the TNG era, by far the most ambitious of the bunch is Rob Caves’s Star Trek: Hidden Frontier. Set shortly after the end of Deep Space Nine, Hidden Frontier focuses mostly on space station DS12, above the Ba’ku homeworld introduced in Insurrection, as well as the starship Excelsior (not Sulu’s version). Although the first two seasons are pretty rough, I highly encourage you to stick with it. The writing improves, the technology improves, the acting improves, and Captain Knapp is promoted, thereby ceasing to be a main character. The Big Bad*, played by Jim Fox-Davis (he later drops the Fox part, making his name substantially less cool), is a great multi-season villain, and several of the actors in the show also do exemplary work, for a fan film — most notably John Whiting as Dr. Henglaar. One note: the show does explore same-sex relationships in the Trek universe, so if that bothers you, you may want to skip it. However, if you do like Hidden Frontier, the story continues in Odyssey and The Helena Chronicles, eventually culminating in a two-hour movie starring pretty much everyone who’s ever been on any of the shows. The production values aren’t quite Star Trek: Phase Two, but they’re close.

As for fan fiction… I don’t read a lot of Trek fanfic, and these days most of it is written about the 2009 reboot. However, there are a couple of excellent Buffy/TNG crossovers** that are worth your time:

And, if you really want to try your luck in The Pit, fanfiction.net has more than 3000 stories in the TNG category.

Sticking in the humor vein, you may also enjoy the music of Voltaire, who has produced such filk hits as “Screw the Ocampa, I Want to Go Home” and “The USS Make Shit Up”. While you’re on YouTube, if you’re in the mood for some really vulgar humor, the Day Job Orchestra has produced some brilliant re-recordings of all five iterations of Trek — just make sure to wear your headphones. Also on YouTube, you’ll find that many people have put together their own opening credits sequences for various Trek-related properties — such as this TNG/Dallas mashup. Using “related videos” alone, you can spend… oh, about 45 minutes… just watching these things.

But no matter what you do to continue your mission, be confident that it will continue, in one form or another. Somewhere out there, Captain Picard, Captain Riker, Counselor Troi, Commander Worf, Commander La Forge, Wesley, Beverly, Guinan, Ro, Barclay, and all the others you knew and loved*** are still Star Trekking across the universe, be it on the Enterprise or the Titan, or even back at Starfleet headquarters or somewhere in the Badlands.

I’ll be with them. I hope to see you there.

Thus ends #25DaysofTNG. I hope you enjoyed it, and I hope you joined the discussion. And don’t worry — even though DS9‘s 25th anniversary is coming soon (and Voyager‘s right after), I’m not going to go quite as all-out as this. I might do a few articles on it, but not 25. Not again. I definitely think I bit off a bit more than I could chew when I proposed these articles in the fall of 2011. My lesson has been learned.

For now, it’s time to put an end to my trek through the stars. All good things… must come to an end. 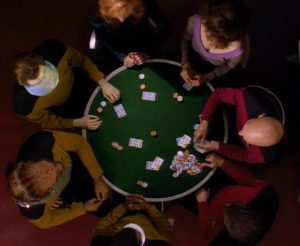 * If that counts as a Buffy reference, you know what to do. I’m sure you already took a drink just for the title.

*** I know Data’s not on the list. I’ve heard tell that B-4 eventually gets Data’s memories back in a ST3/ST4 sort of thing, but I haven’t read that story yet.