This article contains major spoilers for all TNG relaunch novels up to and including the Typhon Pact series.

Even though Star Trek canon says that, after Nemesis, there was no more official Trek until Spock attempted to save Romulus, I think we all knew the intellectual property was too valuable to just be left lying there. The TNG novelists — old and new alike — were given free reign to do whatever was necessary to keep the story going, and they certainly did that.

The relaunch novels can, at this point, be broken down into three main story arcs.

The Borg Are Coming 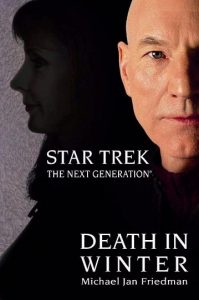 The story begins with Death in Winter, reuniting some of Picard’s old shipmates in an attempt to save a colony from a Romulan plague. The book is most notable for furthering the relationship between Picard and Beverly, which continues into Resistance. In that book, we meet several new characters that will become the Enterprise-E’s replacements for Data, Perim (the Trill who used to drive the ship), Daniels (tactical officer), Riker, and Troi. Geordi and Beverly stay aboard. The main plotline of Resistance is that Admiral Janeway believes the Borg are dead and gone, but Captain Picard knows differently. In the end Picard is proved correct and a minor Borg incursion is stopped.

We next move on to Before Dishonor, which also directly influences the Voyager relaunch in that it features Seven of Nine and Admiral Janeway. The Borg, fearing extinction after Janeway destroyed the transwarp conduit network, have become more malicious and menacing, and they’re out for blood — Federation blood. Once again Janeway helps to defeat the Borg, but this time the cost is her own life — not canon, but it still ripples along the various timelines of TNG and Voyager, affecting Chakotay and Seven most of all. I really liked this book; I thought Janeway got a very fitting end.

The final book in this arc is Greater than the Sum, which I haven’t read. It introduces T’Ryssa Chen, possibly one of the most annoying Mary-Sue characters I’ve seen in a long time (at least in the way that Keith R.A. DeCandido wrote her in A Singular Destiny; for all I know Bennett did her justice in this book), and is also notable as being the book where Picard and Beverly decide it’s time to have a kid. Also, the one weapon that can actually harm the Borg, the transphasic torpedo, is further explored.

We learned from the S.C.E. novels that, when you want to kill a buttload of people, you call in David Mack. Mack’s Destiny trilogy is one of the best multi-novel Trek arcs I’ve ever read, and it brings in characters from every iteration of Trek, including the novel universes (except for Diane Carey’s Challenger).

The first book, Gods of Night, establishes that NX-02, the Columbia, was lost in the Enterprise era. It turns out there was a reclusive race called the Caeliar that the Columbia tried to contact. Several crew-members were kept under house arrest while everyone else on the ship tries to get them back. The crew on the planet inadvertently destroys it.

Meanwhile, in the present, the wreck of the Columbia is discovered by the Aventine, Captain Ezri Dax’s new ship. Riker, aboard the Titan, discovers survivors of the Columbia. Picard intercepts two Borg ships and, via his latent connection to the Borg, discovers that a massive offensive is about to take place.

We then move to Mere Mortals. Riker and the Titan crew are trying to find out what happened to the Columbia crew and understand why her captain is still alive and vital, centuries later. Back in the Federation, Picard fights the Borg, eventually being rescued by Dax and the Aventine. It’s revealed to the greater group that the Borg are going to try and kill everyone, and the Federation puts together a force to try and stop them. Picard and Dax take their ships through the Borg’s new subspace tunnels, trying to find and stop their attack fleet, but don’t find them until the very end of the book (naturally). 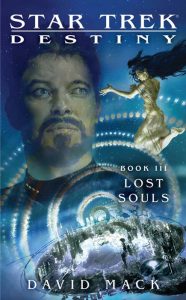 Also, the book spends a fair bit of time with the Titan, who has beamed down an away team to meet with the Caeliar, and now the Caeliar won’t let them go. Basically the same thing that happened to the Columbia crew, except that they’re also dealing with Troi having miscarried a child and refusing to let the doctors remove it so it doesn’t injure her.

The final book in the arc is Lost Souls, which is graced with the worst artistic depiction of Captain Riker that I’ve ever seen. Thousands of years ago, a Caeliar city-ship that was thrown through time is home to several Starfleet officers. As the book progresses, we find out something truly awful about the creation of the Borg, and I won’t spoil it for you. Back in the present, the Federation fights the Borg and a lot of people are killed, but in the end the Borg are completely destroyed forever.

Now the Enterprise moves onto its next series of missions, with their new crew in place. Captain Picard, Commander Worf, Geordi, and Dr. Crusher remain on the ship, joined by:

I will say that the novelists have done a good job setting up the updated command crew, but the books are still all about the four remaining original crewmembers. I didn’t particularly enjoy most of the Typhon Pact stories, but I am looking forward to David Mack’s new “Cold Equations” trilogy. The writers are trying to get readers to like Lt. Chen, but I just can’t get into her. I’m enjoying Lt. Choudhury, though. She’s cool.

And there you go. The continuing voyages of the Enterprise-E, in novel form. Go forth and see what’s out there.