I think it’s safe to say that most kids — at least, most of us who had dogs — always wanted our dogs to be able to talk. Odds are good it never happened to you, but it did happen to Tyler James and Avery Jennings, the two human main characters of Disney Channel’s new show Dog with a Blog. 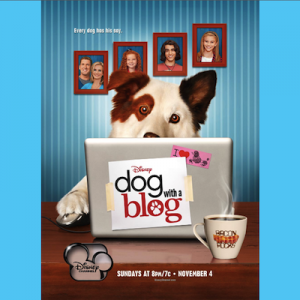 Dog with a Blog is the story of Stan, a rescue dog adopted by Dr. Bennett James, a child psychologist who, about a year ago, married Ellen Jennings. Bennett has two children, Tyler (a teenager) and Chloe (who looks about six); Ellen’s daughter, Avery, appears to be in middle school. Stan’s gone through several homes but always seems to end up back at the shelter. However, when he inadvertently reveals to Tyler and Avery that he can talk, he realizes that these kids love him and really want to keep him, even though a talking dog is kind of a freaky thing. The only problem is keeping his talking a secret from the rest of the family.

So far, only one episode of Dog has aired — the next one, according to the promos, will be on November 4 — so it’s kind of hard to tell where the story is going, but since the program is on Disney and aimed at kids, it’s pretty clear that there will be a positive lesson in each show. The first one was about blended families getting along — Tyler and Avery, who are nothing alike, must work together to rescue Stan from the shelter, where he ended up after a misunderstanding, and in doing so they learn that they really should be nicer to each other.

The characters in Dog are pretty much exactly what you expect — full of tropes. To wit:

The show also has a tie-in website, SeeStanBlog.com, which contains several extremely-short blog entires that users can comment upon, as well as the standard TV-show fare. I’m guessing that it will be regularly updated, but I’m hoping the blog entries get a little better; we see Stan blog on the show, but the two entries he did in the premiere aren’t on the site yet. Someone in the Disney Channel content department is going to hear about that, I’m betting.

In order to judge the effectiveness of Dog with a Blog vis a vis its target audience, I asked my six-year-old daughter a few questions about the program. Here’s what she said:

I think, overall, that Dog with a Blog is a pretty good show, even if it did take way too long for the dog to show up in the pilot. I always wanted my dog to be able to talk, back when I was a kid, and although she never did, the idea of the show is close enough to that to keep my attention. I’ll watch it when it’s on, and I think your kids will too, but it’s not the kind of kids’ show that’s intended to appeal to adults. At least, not yet.

Note to Parents: This show is rated TV-G, which means it contains nothing objectionable. Some of the jokes were pretty lame, but there was no bad language, violence, or nudity. Of course, you should use your own best judgment when it comes to your children.