I was really racking my brain for one more article topic*, and this morning (September 14) I was posting something to my quote blog and I realized that each of the stars of TNG have probably had interesting things to say in their lives and careers. So let’s take a look at that. 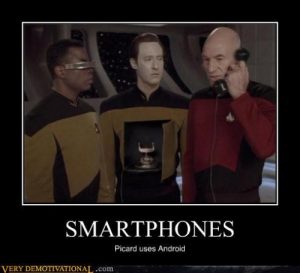 As Captain Picard (in “Peak Performance”): It is possible to commit no mistakes and still lose. That is not a weakness; that is life.

As Himself: Every now and again I sit in a hotel room, watching the show on television and I go, “Hello. I don’t remember this episode.” I’ll be sitting there watching and forgetting that I ordered room service and there’s a knock on the door. I let the guy in and he comes and sees that I’m watching the show. He’s going to go back to the kitchen and say, “I’ve just seen the saddest thing ever. This guy is sitting there watching his old show.”

As Commander Riker (in “11001001”): What’s a knockout like you doing in a computer-generated gin joint like this?

As Himself: I’ve always thought that we, as human beings, would be naive and arrogant to pretend that we’re the only life form in the galaxy. 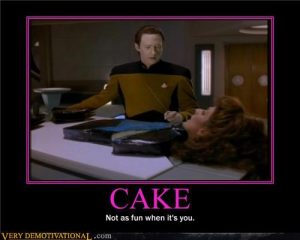 As Counselor Troi (in “Descent, Part I”): Feelings aren’t positive and negative. They simply exist. It’s what we do with those feelings that becomes good or bad.

As Herself: I was originally cast to be the brains of the Enterprise. Somehow I became The Chick. There’s a little ugly girl inside of me going ‘Yay! I’m a sex symbol!’ 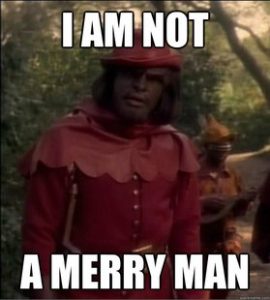 As Worf (in First Contact): If you were any other man, I would kill you where you stand!

As Himself: I’ve spent so much time in that makeup that I’m now unrecognizable. The business doesn’t know who I am.

As Geordi La Forge (in “I, Borg”): Think of it this way: every time you talk about yourself, you use the word ‘we’: ‘we want this’, ‘we want that’. You don’t even know how to think of yourself as a single individual. You don’t say ‘*I* want this’, or ‘*I* am Hugh’. We – are all – separate – individuals. *I* am Geordi. *I* choose what I want to do with my life. *I* make decisions for myself. For somebody like me, losing that sense of individuality is almost worse than dying.

As Himself: As long as we are engaged in storytelling that moves the culture forward, it doesn’t matter what format it is.

As Dr. Crusher (in “Angel One”): It looks horrible. Tastes worse. But it’s absolutely guaranteed to make you feel better.

As Herself: Life is so fast these days, and we’re exposed to so much information. Television makes us a witness to such misery.

As Guinan (in “Rascals”): That’s the wonderful thing about crayons. They can take you to more places than a starship.

As Herself: I don’t have pet peeves, I have whole kennels of irritation. 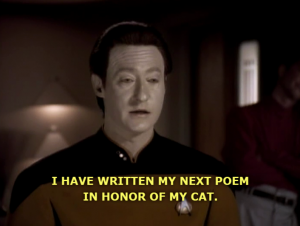 As Data (in “The Outrageous Okona”): Take my Worf, please.**

As Himself: I think it’s likely that there will be Datas out there one day. I hope so, if there are, that they all look exactly like me!

As Himself: Farts are a hug you can smell.

As Ensign Ro (in “The Next Phase”): I don’t have all the answers. I’ve never been dead before.

As Herself: The irony is that I’m a 30-year vegetarian. I’ve been an animal activist my entire life, so the role of Maryann [on True Blood] has been a bit challenging – especially with the lovely meat tree.

As Chief O’Brien (in “Encounter at Farpoint”)***: You know anything about Farpoint Station, sir? It sounds like a fairly dull place.

As Himself: I played trombone for 10 minutes, and then I was in an accordion band in school for even less. 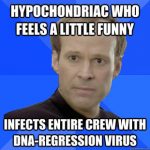 As Barclay (in “The Nth Degree”): Young children are sometimes frightened of the world. That doesn’t mean that their parents should let them stay in their cribs.

As Himself: It could be that people just want to be connected to something that’s bigger than they are that can’t be proven. I don’t know, I don’t think that’s it.

As Mrs. Troi (in “Cost of Living”): Every one of us has a thousand different kinds of little people inside of us. And some of them want to get out and be wild, and some want to be sad or happy or inventive or, or even just go dancing. That’s why we all have so many different urges at different times. And all those different little people inside of us… we must never be afraid to take them with us, wherever we go. I mean, who knows when we, we may need one of them to pop up and rescue us from ourselves?

As Herself: You put funny people in funny costumes and paint them green and we could talk about anything we wanted to, because that was the only thing that fascinated Gene about this particular genre.

As Himself: Roddenberry warned me that I had no idea what I was getting into with Star Trek. Someone should have warned me about My Little Pony! Egads!

* I wrote these very much out of order. In fact, the introduction to this whole extravaganza hasn’t even been written yet. I’ll probably do that later.

** This was perhaps the only funny line of the entire episode.

*** For about ten years I typed that as “Encounter at Fartpoint” because the 12-year-old inside of me simply wouldn’t let the joke go.