While Star Trek: TNG had a strong core cast, sometimes it was guest stars and recurring characters that made certain episodes work. With that in mind, here are the ten that I consider the “best”.

The rules: the character must appear in two or more episodes, and two-parters count as one episode.

Picard: Is she alive?
The Traveler: As long as she thinks she is alive, she is alive.
Riker: What the hell does that mean? 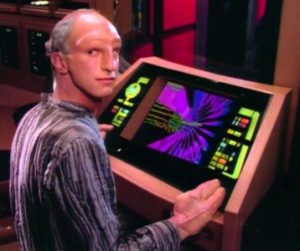 Strongest Episode: Where No One Has Gone Before (1.06)

Why He Was Awesome: Early on in the series, Star Trek novelist Diane Duane and co-writer Michael Reaves developed a great script that you can find on the internet if you’re interested. What we eventually saw was the first really good episode of TNG, “Where No One Has Gone Before”, which was an extremely high-concept story about, among other things, the power of thought and how it affects reality. The Traveler was our window into that world, and again in two other episodes. Really, he was all about helping Wesley, who apparently had whatever elan vital makes new Travelers, and he was monitoring him the whole time. Unfortunately this tied him to some rather clunky Wesley-related dialogue, but viewers knew that, whenever the Traveler showed up, we’d get an episode that required a viewer to think, and that was something I always enjoyed.

O’Brien: It’s not you I hate, Cardassian. I hate what I became because of you.

Why He Was Awesome: More than any other recurring character, O’Brien was sort of the “utility guy” that we saw throughout TOS with characters like Mr. Leslie, Mr. Kyle, and even Yeoman Rand. In the beginning he was always there, and he had a name, but we didn’t know a lot about him. However, as the series progressed, O’Brien became a character that the rest of the crew knows, likes, and interacts with on a regular basis. He was such a strong character that he became one of the main crew members of Deep Space Nine, and that’s saying something. Plus, the transporter is probably one of the coolest pieces of technology in the Star Trek universe, and people who can run that thing automatically get a few extra points.

Guinan: Am I disturbing you?
Ensign Ro: Yes.
Guinan: Good. You look like someone who wants to be disturbed.

Why She Was Awesome: Guinan joined the Enterprise pretty much to be the conscience of the king — that is, a confidant, at first to Picard and then to the crew at large. She’s one of the last people alive from a long-lived species that was destroyed by the Borg, and she harbors a lot of hatred and anguish from that event. Plus, she knows Q and has some sort of power over him. No one really knows what, and it was never really explained. Guinan existed to tell Our Heroes the things they needed to hear but wouldn’t hear from anyone else, and as a deus ex machina (in that regard) she was successful.

K’Ehleyr: I don’t bite… actually, that’s not true, I do bite. 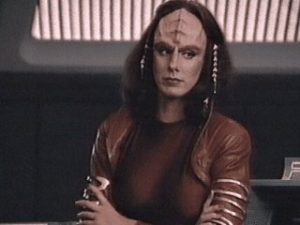 Why She Was Awesome: Although K’Ehleyr only appeared in two episodes, she left a lasting mark on the Star Trek universe because she showed us a different kind of Klingon — one we could identify with. Plus, she was one of very few Klingon women who appeared traditionally “sexy”, and she broke through Worf’s stony exterior to show us that he was a man, just like any other, albeit with a different kind of personal honor and a ridged head. Her way of speaking and behaving definitely added a distinct flavor to the Klingons of the TNG universe, and that was a plus; her appearance in “The Emissary” plus “A Matter of Honor” really changed the way viewers thought of Klingons and helped chart the course of the Klingon people throughout the rest of Star Trek.

Moriarty: A holodeck character? A fictional man? Yes, yes, I know all about your marvelous inventions. I was created as a plaything so that your Commander Data could masquerade as Sherlock Holmes. But they made me too well, and I became more than a character in a story. I became self-aware. I am alive.

Why He Was Awesome: Moriarty is a great villain in any incarnation — Andrew Scott, Jared Harris, Daniel Davis, and every other one I can think of. He’s much more traditionally-Moriarty in these two episodes, and what makes him great is that he’s not even a villain — he’s a pragmatist and a scientist. He doesn’t want to hurt Pulaski or destroy the Enterprise; he just wants to be recognized as a self-aware being and be allowed to explore the galaxy. That, I think, is what made this incarnation stick with me for so long: Conan Doyle used Moriarty as an evil foil for Sherlock Holmes, and in the BBC’s Sherlock, he’s very much chaotic-evil (he doesn’t want to hurt any specific person; he just wants to defeat Sherlock at any cost); however, on TNG, Moriarty is just like the rest of the crew, albeit in holographic form and stuck with 19th-century sensibilities. That’s what makes him an even better foil.

Tomalak: Has Starfleet Command approved this arrangement?
Picard: No.
Tomalak: I like it already.

Why He Was Awesome: Tomalak really had the potential to be a Big Bad for the Enterprise crew. Andreas Katsulas* portrayed the character in such a way that you just knew he was nothing but plans within plans within plans. In fact, it wouldn’t surprise me if a lot of the character notes for Tomalak were recycled for Gul Dukat and/or Weyoun. However, the writers went in a different direction, and anyway season-long arcs for most TV shows were still a few years in the future. Still, I do believe that, had TNG come out in 1997 instead of 1987, the Tomalak character would’ve harassed the Enterprise crew (and probably Worf and Picard in particular) for a season or more until his untimely demise.

Why She Was Awesome: Ensign Ro really was the first character to join the Enterprise crew who didn’t want to be there. She came from a war-torn planet, managed to make something of herself, but got stuck living with the guilt of getting a team killed on a previous mission and throwing herself on her sword. She was patently unlikable, at least in the beginning, and I think that’s what endeared me to her. Over time she became an even-more-interesting character, mixing Picard’s strategic mind, Worf’s willingness to fight for what’s right, and Mrs. Troi’s ability to get away with saying what needs to be said. The dynamic between Ro and Picard was particularly good, because all she wanted to do was make him proud of her (after a while), but she had to disappoint him in the end by doing what she believed was the right thing (joining the Maquis). The novels give her some redemption — she replaces Odo in the DS9 relaunch, and I believe somehow she has been promoted to captain (I’m a bit behind on the tie-ins) — and I think that, even though the novels aren’t canon, most of us still believe she somehow escaped the Dominion’s extermination of the Maquis and is alive, somewhere, doing the right thing and kicking ass as necessary.

Why She Was Awesome: I’ll admit this outright — I disliked the character of Mrs. Troi when she first appeared. She was overbearing, annoying, and took screen time away from our heroes by making fun of them. However, in doing this series of articles, I’ve come to look upon Mrs. Troi as a great character who was unfortunately saddled with a lot of badly-written episodes. I mean, her friendship with Odo on Deep Space Nine was a great example of odd-couple comedy, and throughout most of her episodes, she really did get the best lines. However, the writers on TNG pretty much used her exclusively as a humorous character (with the exception of “Half a Life”) who wanted nothing more than to find a husband to replace Deanna’s dad, and that was a shame.

Why He Was Awesome: The very concept that Data could’ve been made “better” is something the show tackled early on, and they did so by showing that there’s a very good reason he’s not. Lore was a fabulous foil for Data because he allowed Data to see everything that his father (Dr. Soong) could have done to make him more human, and then see it misused by his older brother (Lore). It made it that much more painful for Data — and helped the audience identify with Data even more, while feeling for him because he could recognize the emotions he should be feeling, but not actually feel them. Plus, Lore brought us the Crystalline Entity, which was an interesting villain in and of itself.

Q: It’s time to put an end to your trek through the stars.

Why He Was Awesome: Right from the start, TNG tried to distinguish itself by being more enlightened than TOS, and they did so by putting humanity itself on trial. This introduced us to Q, a quixotic being who, as was said in the show more than once, treated the Enterprise crew (especially Picard) as lab rats or favored pets. But while Q was being a pain in the ass, he also consistently helped to teach the crew valuable lessons about misuse of power (“Hide and Q”), superiority complexes (“Q Who”), and even the dangers of changing the past (“Tapestry”). He would go on to torment Captain Janeway on a regular basis, but I think he was at his best matching wits with Picard — John de Lancie injected just the right amount of humor and sinister-ness into his dealings with the captain, and it made him a memorable character that even now is still considered one of the best non-main-crew creations of Star Trek‘s “modern” era.

And, if you’re interested, here’s the characters who just missed being included:

Do you disagree with my choices? Did I miss anyone glaringly-obvious? Use the comments or the forums to tell me.

* Katsulas was born the same day as me (though not the same year) and died on my father’s 54th birthday. Talk about your coincidences.

** I happened to mention Star Trek once in a paper I wrote in 10th grade, and my teacher informed me that she went to the same college as John de Lancie and actually knows him. Which was pretty cool at the time, I have to admit.