Yesterday, we looked at the exterior, engine room, and bridge of the new Enterprise. But the bridge wasn’t the only part of the ship where we spent a lot of time, even just on Deck One. Two other rooms were extremely important — although neither was the bathroom*.

The first was Captain Picard’s ready room — his office, in other words — which was decorated rather like a professor’s office at a well-respected college. This was the domain of the captain’s fish, Livingston, and also his couch, his desk, his Stargazer model, and his gigantic book of Shakespeare. Though a room like this never appeared in the original series, the producers gave Captain Archer one in Enterprise. I’m just glad J.J. Abrams hasn’t retconned one onto his Enterprise yet. 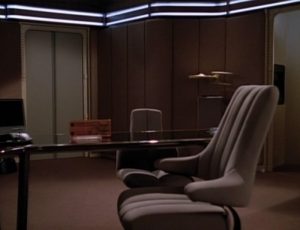 Then we had the conference lounge — or, the place where exposition goes to die. At least on Kirk’s ship the scenes in there were short, or had a point. It wasn’t just a place where people went to discuss every damn thing, and rarely was the entire crew brought in. Usually it was Kirk, Spock, McCoy, and maybe Scotty. Not like Picard, who dragged in Riker, Troi, Beverly, Worf, Tasha, Wesley, Geordi, and anyone else who might be useful to the plot or was getting paid that week. I know I’m being a tad hyperbolic, but only a tad — far too many scenes occurred in that room. At least it had those cool little ships on the wall (until the fifth season).

Moving down the ship… how about those staterooms? Even Captain Kirk had a tiny little cabin, and he was in charge of 430 people. Picard, Riker, Troi, and Beverly all have these ginormous apartments, and even Worf, Data, and Geordi, who are on the interior side of the ship, have three or four rooms apiece. But here’s something interesting I realized recently… y’know “In Theory”? The one where Data dates that security ensign? Even she has a room with a view, and her boss, Worf, doesn’t. Something strange about that, isn’t there? Plus, unlike the cabins on Kirk’s Enterprise, the ones on Picard’s have dining tables, double beds, sitting areas, and screens all over the place; Captain Kirk and Mr. Spock were lucky to have a twin bed and a desk with a couple of crappy chairs.

Also in the saucer section: sickbay. Now here’s where the expanded size and updated production starts to make sense… although if you think about it there really weren’t enough beds to support a crew of 1000-plus. Beverly had several biobeds plus the main exam area, and her office was actually smaller than McCoy’s. But she also had a bigger staff and more space to move around as she worked, which was probably quite helpful. All Bones got were three biobeds, an exam room with a weird wall-mounted pedal thing, and his science lab.

The rec room on the new Enterprise, Ten-Forward, was also a vast improvement on Kirk’s rec room, although in his defense, his ship was more a military vessel that explored stuff, while Picard’s is an exploratory vessel that sometimes gets into fights. Ten-Forward was a true bar-like place with giant windows, several dozen tables, and a bartender with her own staff. I believe there was also an episode where Guinan had an office, but don’t quote me on that; I might be conflating with a tie-in novel. Ten-Forward could be used for plays, concerts, poetry readings, and even special events, whereas Kirk’s rec room (which saw both a wedding and a diplomatic party in the run of the series) was always the same drab box with the same replicators and the same tables. 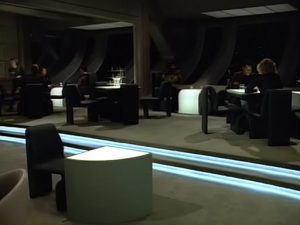 Now, having said all this, after the original five-year mission Kirk’s Enterprise got quite the series of upgrades — crew quarters were expanded, the bridge got an extra door, sickbay was actually bigger than what Beverly had on TNG, and the rec room was positively gigantic. I mean, the entire crew fit in there in TMP, remember? And it certainly had a much bigger television. The shuttlebay and cargo area was also made larger — although it had nothing on Picard’s three shuttle bays and countless cargo compartments — and main engineering, if sometimes cramped, actually looked like people worked there.

I’m going to avoid talking about the Sovereign-class Enterprise-E because that would open up a whole new can of gagh, but I do want to point out that all that gold signage on the doors was probably a royal pain for the production designers to light and an equal pain for the crew to read.

So, all things considered, which was the better Enterprise? I personally think it depends upon what you want your starship to do. If you want comfort, convenience, and a lot of space, but you don’t want to blaze new trails or be out on your own, then you want Picard’s Galaxy-class cruiser. But if you’re more concerned about a ship that gets the job done no matter the cost, then it’s Kirk’s Constitution-class Enterprise that you want to be on. The whole mindset shift between TOS and TNG has something to do with that, to be sure, but I think that, on TNG, the ship itself was less of a character in the show than a place where things happened.

Just don’t get me started on the relative size of the reboot Enterprise, or the fact that main engineering was just a series of catwalks and pipes, or that apparently you can run from anywhere to anywhere without needing a turbolift. Narrative convenience can sometimes come back to bite you in the ass.

* Although if you look at some of the technical manuals put out around the time TNG first aired, you’ll see that the alcove leading to the conference lounge also had a door to a restroom. Also, apparently there was a door beyond the captain’s replicator in his ready room that led to a private bath — or maybe a portal to executive bathroom island.