The concept of “one person at the center of a spider’s web” isn’t new in fiction — from the mob boss who pulls everyone’s strings to something as simple as the network of interconnections in the film Love Actually, we’ve all seen it done before.

But as the Hulu series The Booth at the End shows, there’s a reason why it’s still being done: because it’s really damn compelling. 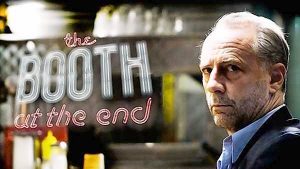 Booth* stars Xander Berkeley (Nikita, 24) as The Man, the only true “main character” in the show. The Man sits in the booth at the end of Cadillac Jack’s diner in Los Angeles, right near the jukebox. Day in and day out he can be found there, wearing a plain black suit (no tie), reading from or writing in his leather folio and meeting with what he calls “clients” — people who want to make a deal with him.

If they’re not sure they’ve got the right guy, all they have to do is tell him they’ve heard this place serves a great pastrami sandwich.

And who is The Man? That’s where the genre aspect of the show comes into play. Though it’s never explicitly stated (at least, not in the first couple of episodes), The Man is most probably a form of Satan (or The Adversary): you tell him what you want, and he tells you must you what do to get what you want. You might have to kill someone (or a lot of someones); you might have to commit a lesser crime; you might have to make someone’s life better. Whatever your task is, The Man will never force you to do it — it’s always your choice, and you can always walk away, even in the middle of things. The Man really doesn’t care if you complete the task or not; if you don’t complete the task, you don’t get what you want. What he does care about is the details: how you feel, what you’re thinking, what you do to complete the task, and if you’re having second thoughts.

For most of the first episode, it’s unclear just how powerful (or not) The Man is, but in the second, when Allen completes his task, The Man says “answer your phone” a couple of seconds before it rings, and that alone tells the viewer that, yes, there’s definitely something up with The Man. He has some sort of supernatural power that, as the show progresses, we’re going to learn more about.

The Booth at the End has exactly one set: Cadillac Jack’s diner. The Man always sits in his spot, watching the door; everyone else must come to him. We see the outside in establishing shots, but for the most part the show occurs on a very small scale. Props are actual food and drink served at the diner; costumes are simple, and only The Man seems to be “costumed”, per se. The other actors are a mix of well-known and not-so-much — Sarah Clarke (24, and also Xander Berkeley’s wife) plays a nun; Timothy Omundson (Psych) is a painter; Jack Conley (Angel) is a detective who wants to bring down a thief. The music is performed by Tree Adams, who is probably best known (to me) for doing the music on Californication.

I found Booth to be strangely compelling. I didn’t know how much I would like it when I first started watching, but it caught me right from the start. Though the writing is deliberately obfuscatory at first — sometimes annoyingly so — it distills down to the reality of the situation pretty quickly, and by the end of the second episode you’re not quite sure just how much power The Man really has… and just how much of the truth he’s telling his clients. All you know is that Xander Berkeley, for all his scruffy, everyman look, has one hell of a disturbing smile.

That smile alone isn’t enough to keep me watching. Fortunately, the show itself is — and it’s also enough for me to evangelize it to my friends. And you.

Note to Parents: This show contains mild language and violence, but only if you count what’s shown on screen. It also contains discussions of violence, murder, terrorism, and other adult topics. I think teens who’ve seen these things on other shows could definitely handle the subject matter, but I don’t know that they’d be willing to give the show a chance. Of course, you should use your own best judgment when it comes to your children.

* I couldn’t find a place to fit this in the flow of the article, but the show first aired on Canada’s CityTV in 2010, and the second season began on Hulu this month.