In certain parts of the US, immigration policy and illegal alien rights are forefront. In other parts, they exist only as issues upon which to campaign. Regardless of your opinion on the subject, it’s pretty much a foregone conclusion that we’re moving in one of two directions: full amnesty or full illegality.

Ink, which will be released on October 15, tells one such story. Or, more precisely, four of them.

Ink, a novel by Sabrina Vourvoulias, is a near-future semi-dystopia set in and around Hastings (which, for the purposes of this novel, is in what the author tells me is “a somewhat-fictionalized New York State”. It follows four main characters, each with their own story to tell. To wit: 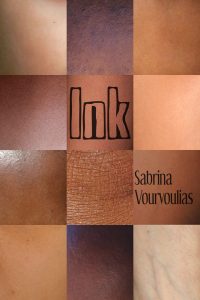 Here’s the thing about Ink: while in theory I liked the concept of the book (which reminded me in some ways of Will McIntosh’s Soft Apocalypse), I think the author tried to cram too much into the novel. The prologue, with Finn and his editor, is rife with near-future technology words such as “twitterfall” and a lot of inside-baseball news jargon*. As the book progresses, the tech settles down a bit, but the book continues trying to tell too much story. Especially when we go from sci-fi to fantasy (or, at the very least, magical realism). Those parts of the book were by far my least favorite — I felt they detracted from the main story and kept taking me out of the flow of things.

Vourvoulias’s writing is fluid and easy to read, and the story did keep me interested for the most part. The characters were well-rounded and often compelling — I never thought to find myself rooting for a gang leader, and that’s quite an accomplishment. I also found the topic to be quite timely, especially given that the novel is slated for release less than a month before the US presidential election.

I do think that Ink and stories like it — such as the film A Day Without A Mexican — do need to be told. Without getting political, I feel confident in saying that the US is getting more and more pendulum-like in its application of policy. We go too far in one direction, then swing even farther in the other, and so on — pretty much the reverse of what those swinging ball desk tchotchkes do — and there’s no end in sight. Ink is a pretty good look at what will happen if we go too far in one direction, and what makes it disturbing is how many people could read it and think “hey, these are all good ideas, let’s enact them now!”

Of course, these are the same people who would read Swift’s “A Modest Proposal” and then form an anti-baby-eating group, so listen to them at your own peril.

While Ink is not a perfect book, and while it does have things I didn’t like and didn’t enjoy, I found it to be overall a good first outing from Sabrina Vourvoulias. Crossed Genres Press makes it easy to pick up a copy — they release their ebooks in almost every format imaginable (I asked for and got an ePub, where most publishers would just provide a PDF and be done with it). It is a politically- and socially-charged book, and overall a pretty good read.

Let’s just hope it isn’t as prescient as I fear it to be.

Thanks to Crossed Genres Press, the novel’s publisher, for providing a review copy.

Note to Parents: This book contains adult language, violence (including sexual violence), and adult situations. It is definitely not intended for a YA audience. I do think that mature teens could handle it — the violence is pretty much on par with The Hunger Games, although it does exceed it in a few places. Of course, you should use your own best judgment when it comes to your children.

* Also, the book references Digg, a website that, while during the writing was pretty big, has by now fallen into obscurity. Ah well. Can’t win ’em all.