This review contains spoilers for both the filmed and televised versions of Buffy the Vampire Slayer.

Twenty years ago today, a film called Buffy the Vampire Slayer opened in theaters to unimpressive reviews (and only a 32% on the Tomatometer). At that point, no one could possibly have expected that Joss Whedon’s story about a California valley girl would morph into a television show that even today is still impacting fans in powerful and meaningful ways.

From the most humble beginnings, eh? 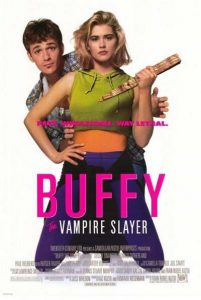 If you talk to EA forum member Zorag, he’ll tell you that the movie is far, far better than the show. As a fan of the show, I don’t see it that way. But I can see how, if you take the movie just as it is, it’s an enjoyable piece of cheesy vampire horror with some silly moments and some unexpectedly-serious ones.

The plot of Buffy the Vampire Slayer is relatively simple: a cheerleader who wants nothing more than to be popular and date a hot guy starts having dreams about vampires through the years. Later, she’s approached by a man named Merrick who says she’s “The Slayer” — the one girl in all the world with the power to fight the forces of darkness*. She resists, but after being shown that she really is this Slayer person, she allows Merrick to train her. When Merrick is killed by an ancient vampire named Lothos, it’s up to Buffy to put a stop to Lothos and his crew before everyone in her high school turns into vamp food.

Buffy stars Kristy Swanson as the titular character. She does a fine job portraying the facile, superficial California teenager, although when things start to get serious, her character becomes a bit tough to believe. I think some of that may have been the rewriting**. Buffy’s watcher is portrayed by Donald Sutherland; he brings a lot of gravitas to the role, given what he had to work with. There was some mystery to him that was left in the dust, unfortunately — something about reincarnation — that I really think should’ve been cut or further explored. Joining Buffy and Merrick on the side of good was Luke Perry as Pike, playing basically the same role he played on 90210 — the soft-spoken bad boy from the wrong side of the tracks who nonetheless can be counted on when the chips are down.

The film also starred Rutger Hauer as Lothos and Paul Reubens as Amilyn. Hauer definitely chewed the scenery while simultaneously looking like he was sleepwalking through the role. Reubens seemed to be having a great time, though, and he got the bulk of the good lines — and a death scene that the aforementioned Zorag is quite laudatory towards. The third villain was David Arquette as Pike’s friend, whose name I can’t remember — he gets turned into a vampire, and this makes him evil and powerful.

Also, keep your eyes open for Ben Affleck as one of the basketball players.

The vampires in the Buffy film were more traditional than the ones on the show — when they were staked, they didn’t turn to dust — but they could also fly, which was a bit distracting. And Buffy’s powers were a little more down-to-earth too: she had superior strength, speed, and agility, but she was a little more human in those regards than Sarah Michelle Gellar’s version. Additionally, the filmed Buffy got something like menstrual cramps every time a vampire was near, which I think would’ve been really distracting for seven seasons.

The music and production design of the film were pretty much totally 1990s — synthesizers, ominous tones, happy boppy music for the happy boppy scenes, and so on. The direction, by Fran Rubel Kuzui, was pretty straightforward; I didn’t see anything special in terms of shots or camera work. Writer Joss Whedon really captured the California culture, but a lot of the deeper meaning seemed to get lost in rewrites, and in the fact that film was handed to the Kuzuis (Fran and Kaz, who currently are required to be acknowledged in the credits to every television show and comic book).

I honestly don’t think Buffy the Vampire Slayer was a bad film… but then, I’m biased, because I’m a huge fan of the TV show. If I wasn’t a fan of the show, I think I’d rate the movie much lower — I never really felt the tension, I didn’t buy the love story, and I didn’t feel any empathy toward the main characters. I just wasn’t invested in the movie beyond “hey, what was Buffy like in the filmed universe?” While I think it was a decent, fun film (for the most part), it suffered in many places and, honestly, I’m not sure that the audience was ready for a true Joss Whedon Buffy the Vampire Slayer movie.

Hey, I admit it: it was pretty funny.

Note to Parents: This film contains some adult language and situations, as well as violence. I mean, it is a film about killing vampires. However, it’s rated PG-13, and that was PG-13 in the early 90s. I think most kids ten and older will be able to handle it, although the slower parts of the story will turn them off. Of course, you should use your best judgment when it comes to your children.

** According to several articles on the subject, the Buffy film script went through a bunch of rewrites after Joss Whedon turned it in, and he’s said he’s not pleased by how it turned out.