Imagine that, a year or so ago, you saw a trailer for a film in which humanity discovered another planet Earth growing slowly closer. Humanity made contact with Earth Two, as they called it, and realized that each and every person on the planet could have a duplicate up there.

Then there’s some cuts of a young blond woman, a car accident, a relationship, and the chance for Our Heroine to win a trip to Earth Two. She seems all introspective; a Coldplay-like song runs in the background; the trailer ends. 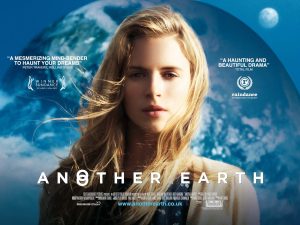 Released in 2011, Another Earth is the story of Rhoda Williams. At the start of the film, she’s 17 years old, just been accepted to MIT, and is on her way home from a party when DJ Flava says on the radio that a habitable planet has been discovered, closer than any found before. Rhoda looks out the window, sees the planet in the sky, and slams her car into one owned by John Burroughs. John, a college professor and composer with a five-year-old and a pregnant wife, falls into a coma due to his injuries; the rest of his family is killed. Rhoda goes to prison for four years, is released at age 21, and that’s when the movie really starts.

Still wracked with guilt over what she did, Rhoda attempts to approach John at his home, to apologize, but backs out at the very last minute and lies about being from a cleaning service. John, who is depressed, borderline alcoholic, and suffering from brain issues due to his injuries, agrees to let her clean his house. And, over the next few weeks and months, Rhoda and John grow close.

At the same time, Earth Two is growing ever closer, and Rhoda has applied to be part of the crew, citing her status as a felon and the kinds of people who were on Columbus’s three ships.

The tension in the story is pretty much “will Rhoda tell John who she really is” and “will Rhoda win the trip to Earth Two”. Because Another Earth is an independent film, you’re never quite sure of the first, but the second is pretty much a foregone conclusion.

The film stars Brit Marling as Rhoda; she also co-wrote it with director Mike Cahill. William Mapother (Lost) plays John. The only characters of import are Dr. Richard Berendzen, playing himself, who is well-known for his work as a professor in the space sciences, and Kumar Pallana as Purdeep, Rhoda’s supervisor at her job (she’s a janitor at the local high school — by choice). The acting was generally decent, although some of the lines seemed a bit forced — especially those from Rhoda’s family.

Cahill’s direction bothered me a bit. It was somewhat reminiscent of Gary Ross’s quick-zoom and shaky-cam from The Hunger Games — there were several scenes where I actually said aloud “could the director not have sprung for a dolly, or even a tripod with wheels?” I think the style distracted from the story; instead of paying attention to what was going on, I found myself trying to keep track of what the camera was doing and why — since this is, after all, an independent film, the director was probably trying to catch little details on purpose. Either that, or he was trying to make it seem like a very slowly-developing movie was more exciting than it actually was. Whichever it was, it annoyed me.

Musical duo Will Bates and Phil Mossman, as Fall On Your Sword, provided the soundtrack for the film. I tend to watch movies with the captions on so I don’t wake my daughter at night, and much of the soundtrack was too understated for me to really appreciate it. I did like the final theme, though.

The only other really odd thing about this movie was the font used for the credits and the time jumps. I work with fonts and text every day, and it’s often my job to make sure kerning looks natural. Well, the kerning didn’t look very natural in this film, and the font seemed to me to be an odd and unnecessarily-straightforward one. Compared to the font used in the trailer, I found the one in the film to be lacking. I know it’s a small thing, but it’s the kind of thing I notice.

That’s not to say I didn’t enjoy the film; I don’t think I wasted my time, and I don’t think I wasted my DVR space. The ending did give me a couple of good questions, but they weren’t the kind of MIND BLOWN takeaways like I got from Primer and Pi. Nor were they the satisfaction of a story well-told with the good guys triumphing over evil as in Ink (a great independent film with truly-disturbing villains and a phenomenal soundtrack; you really ought to see it).

For this next part, to de-cypher the spoiler-riffic text, paste it into rot13.com. But it is very spoilery, so if you don’t want to know what happens at the end of the film, don’t decrypt this text.

If you like slow films, independent films, films with just a touch of sci-fi, or films about the possibility of other planets where you might exist, only slightly different than you are now, I would recommend catching Another Earth. And even if you aren’t into those things, you might like it anyway. Just be warned: it’s not quite what the trailer makes it out to be.

Note to Parents: This film contains adult language and situations, as well as one scene of graphic violence and one attempted suicide. There’s a sex scene, but it’s not explicit, and the only nudity in the film is shot so nothing is revealed. The film is only rated PG-13, so I think most teens can handle it. Of course, you should use your own discretion when it comes to your children.