This review contains minor spoilers for “Railsea”, but does not spoil the ending.

The review you’re reading now will be the third review I’ve written of a China Mieville novel. I’ve read all his books except for King Rat & Looking for Jake. Most of them have similar themes & tropes — the love of home, phantasmagoric settings & creatures, some form of transportation that’s central to the story, & an ending that leaves you wondering why you read the book if you’re going to be left empty when you’re done.

Note that I said empty. Not unsatisfied.

Well, Railsea broke the trend on at least one of them: I wasn’t empty at the end. But otherwise, we’re looking at pretty standard Mieville here. 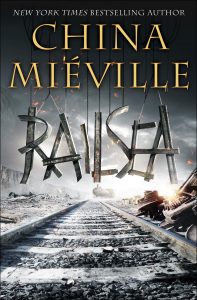 Railsea is primarily the story of Sham Yes ap Soorap, a young man* who works as the doctor’s assistant on a moletrain called the Medes. What is a moletrain? It’s a train that sails the railsea, hunting moles & other Mieville-style creatures much in the same way that a whaling boat hunts whales. & what’s the railsea? Well, imagine you don’t have very much surface water, & you have to go long distances. You might choose to lay down rail lines from here to there. & then you might add more & more rails over time until finally you’ve got a literal ocean of rails for all sorts of different types of trains. You could walk, I suppose, but not with the kinds of fauna that populate the world.

What kind of world has a railsea? One that, years or centuries or epochs ago, was visited by aliens. One that became so polluted that the “upsky” has levels to it, all of which are toxic, all of which are home to strange & horrible creatures. One that used to be earth.

Okay. Now that we’ve got that settled: Sham is the doctor’s assistant on the moletrain Medes, under Captain Naphi, who leads a ragtag crew of interesting fellows (& fellow-ettes) including Sham’s friend Vurinam, Doctor Fremlo, Mbenday, & others. Naphi’s mission is to find the great moldywarpe called Mocker-Jack & defeat him, thereby securing a place in history as someone who found her philosophy**. If this sounds like Moby-Dick to you, well… you’re not alone. Naphi’s part of the story is that of Ahab & Moby-Dick, although the book is about more than that.

While hunting Mocker-Jack, the Medes comes across a wrecked train & salvages some photographs that Sham & Naphi bring to the city of Manihiki. While there, their investigations draw the attention of some unsavory characters. Sham meets Caldera & Dero Shroake, children of the people whose wrecked train they salvaged, & with the photos they invite him on their mission to figure out just what their parents were looking for. Sham declines, but when he’s kidnapped by pirates who seek the Shroakes’ riches, he finds himself headed their way anyway.

& that’s about all the plot I can give you without ruining the last half of the book.

As with most of Mieville’s stories, the love-of-one’s-home theme is strong here. Although Sham doesn’t love the Medes, he cares about the people on it & respects his captain. He does show affection for Streggye, his hometown, although we never see it. But other than that, Sham is pretty much the disaffected youth that we’ve all seen on Instagram: he’s got a decent job as a doctor’s assistant, but it doesn’t make him happy. He thinks being a salvor (salvage train person) will make him happy, but he doesn’t have the gumption to quit the Medes to pursue his dreams. Up until his kidnapping, things just happen to him. It makes it hard to like him. He does redeem himself in the end, growing up a bit as the story progresses, but he isn’t my favorite young-person Mieville character***.

In fact, come to think of it, with the exception of Sirocco the salvor & some occasional moments with the Shroakes, I really didn’t like any of the characters in this book. I think that’s what made it so hard for me to read. See, I’ve read a lot of Mieville, & while the writing is as good as it’s ever been, there wasn’t anyone for me to latch onto & say “I want to keep reading because I want to know what happens to this person.” There were times I wanted to stop reading the book, & it took me an awfully long time to read it not because I am a slow reader (I’m not) but because I was so disinterested with the characters that I went off to read graphic novels just to cleanse my palate.

But I knew I’d have to finish the book because early on Mieville sets up the ultimate goal: find out what the Shroakes’ parents were doing when they found a part of the railsea with only one rail on it. I really wanted to know the answer to that, & that’s why I kept reading. &, unlike other Mieville novels, I wasn’t disappointed. I suppose I should’ve seen it coming, but I thought it would be too easy. The thing is, this novel is ostensibly for all ages, so it couldn’t be too much of a downer ending.

The book does feature some pretty good action sequences — Mieville uses punctuation & spacing to control how quickly or slowly a reader experiences the battle scenes, especially the ones where the Medes is doing its thing & the final battle at the end. But what gets distracting is the use of the ampersand. When I first downloaded the book, I thought there was something wrong with my copy, so I went over to Amazon & checked the first chapter. Nope, it was that way on purpose. In fact, one of the shorter chapters in the book is devoted to explaining why the ampersand is used instead of the word “and”. Unfortunately, this little contrivance got annoying the further I read. Maybe that was one of Mieville’s techniques to control reading speed — you read faster by recognizing the shapes of words, & if you aren’t used to seeing & where an “and” should be, you’re forced to slow down.

Overall I found this to be a good book in terms of setting, style, & technical word usage. I don’t think it was one of Mieville’s best, & I wouldn’t put it up on the same level as The Scar & Embassytown, but if you like Mieville, dystopias, trains, phantasmagoric creatures, or ampersands, this is definitely the book for you. & it does have a good ending — the last thirty chapters or so (each one is no more than 12 pages, & some are much fewer) really do get quite good. You just have to get there.

Note to Parents: As this is a novel for all ages — what I guess they’re calling YA these days — the book doesn’t contain anything too terribly objectionable. The violence & language are no worse than a TV-PG show, & there’s no nudity, sex, or adult situations beyond the discussion of a polyamorous triad. Of course, you should use your own best judgment when it comes to your children.

* I’d put him in his early twenties. Between eighteen & twenty-three. I don’t recall it ever actually being said.

*** That probably goes to Shekel from The Scar.