The following article contains spoilers for the Angel episode “Smile Time”, and is fair game for spoilers of any episodes preceding it, as well as the entire run of Buffy: the Vampire Slayer.

When Joss Whedon and the Buffy team announced that they’d be doing a musical episode, people were skeptical. I mean, how can you make a musical about slaying vampires?

Oh we of little faith. “Once More, With Feeling” was one of the best hours of television made in the last quarter-century*.

As I began watching Angel a few months ago, I heard rumblings that there was an episode centered around puppets sometime in the fifth season. I finally got there and my tweet**, no lie, was: Oh crap… it’s the puppet episode. Now, I knew there were some big story pieces coming up — the arrival of Illyria, the coming apocalypse, and the series finale, just to name a few of the things to be crammed into the next eight episodes. I’ve just been waiting to get to that part. The one I watched prior to this was a World War II-era submarine story where Angel and Spike are caught on a captured U-boat, and it… wasn’t that great. So I didn’t have high hopes for “Smile Time”.

Should’ve learned my lesson from OMWF: trust in Whedon and his team, and he will never lead you astray.

“Smile Time” is, on its surface, a pretty standard demon-of-the-week story: demons have taken over the puppets on a kids’ television show, using their powers to suck out the childrens’ innocence via their TV sets and sell said innocence to other demons. Their goal: buy a hell of their own to live in. When Fred gets wind of an epidemic of kids in stasis — along with a rather clever reference to Tim Burton’s Batman delivered by her assistant Knox*** — she brings the information to Angel and he goes off to try and save the day. Just in time, too, because Angel and Wesley were talking about Nina the werewolf and how she was totally making a move on Angel, who was totally misreading the signals****.

Well, that doesn’t work out, and Angel is turned into a puppet.

Thus begins an absolutely hilarious series of scenes: puppet!Angel fighting Spike, puppet!Angel hiding under his desk, puppet!Angel getting nearly eaten alive by Nina, and, best of all, the scenes leading up to the battle with the demons: first, puppet!Angel carrying a huge sword and leading Fred, Wes, and Gunn out of his office; and then puppet!Angel’s transformation to vampire!puppet!Angel, which was really well-done. I honestly wanted to see v!p!Angel try to bite the bad guy, just to see what would happen. 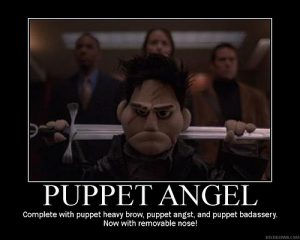 You probably figured out that the good guys won the day — Fred shoots a giant purple puppet named Ratio Hornblower so she can finish a spell after Wesley is thrown aside; Gunn dismembers one of the other puppets; Angel sends the main bad guy flying across the set to crash into a treehouse or something. And, in the end, Angel invites Nina***** out to breakfast — while still a puppet.

Also, in a subplot no one was paying attention to, Gunn got his neural upgrade refreshed. Good for him.

Now that you know about the episode… maybe you want to know why I chose to write about it. Simple: because, as I said before, trust in Whedon. I’m not going to say he’s the greatest writer ever, but he’s pretty damn good at it, and many of his shows, when not being jerked around by Fox, contain some of the funniest moments and well-scripted plots to be seen on episodic television. He’s garnered lots of praise for The Avengers. He’s been lauded for his comics. Clearly the man knows his stuff, and by the time “Smile Time” aired, he’d already had two successful television shows (and one, Firefly, which had been cancelled despite its reception in the sci-fi community). If anyone could turn a puppet-centric episode into something funny that also moves the plot along, it would be Whedon.

But all the praise can’t be given just to him. It must also go to the puppeteers themselves, many of whom were from the Jim Henson company (and also worked on Greg the Bunny, which starred Buffy alum Seth Green). puppet!Angel, despite being only about three feet tall, walked and talked, moved his face, fought, carried a sword, and even pulled off his own nose. I’m a big fan of people who make difficult things look effortless, and the puppeteers really pulled this off — especially the ones controlling puppet!Angel******. And the human actors played off the puppets really well — I literally LOL’d when puppet!Angel fought Spike, much to the chagrin of my co-workers, and the creepiness of the evil puppet sticking his hand up producer David Fury’s******* back to “control” him was… well… creepy.

Finally, what I liked about this episode was that, even though it was clearly demon-of-the-week, the writers (teleplay by Ben Edlund, creator of The Tick; story by Edlund and Whedon; Edlund also directed) still managed to make it both funny and emotional while also fitting it into the greater sequence of events for the season. With the departure of Eve and the disappearance (to a hell dimension) of Lindsey, the season has had no Big Bad (or even Little Bad) for a couple of episodes. Still, as the man ultimately in charge, Whedon made sure the episode kept us interested in the general storyline of Season Five. Between Whedon, Edlund, Drew Goddard (Cabin in the Woods), and Steven S. DeKnight (Spartacus), a season that at first I thought would be kind of lame compared to previous ones — I mean, you’re not the little guys fighting evil anymore; how can it be a challenge when you have the resources of a multi-million-dollar law firm? — has nonetheless kept my interest, and in some ways done it even better than the first season of the show.

A lot of television shows are built around the concept of “evil of the week” (Criminal Minds), “disease of the week” (House), or “murder of the week” (Psych). Whedon’s shows generally aren’t, but with episodes like “Smile Time”, we can see that he and his team can do it with the best of them. Maybe the concept of demonic puppets wasn’t high art, but it was vastly entertaining, and, really, what more can we ask for from episodic television?

Note to Parents: “Smile Time” contains puppet-on-puppet violence and puppet-on-human violence, though neither is especially explicit. There is some mature language, and one scene of fairly-revealing nudity (if the actress had moved her hand one millimeter downward, the show would’ve had to be on pay cable). If your kids have been watching Angel up to this point, they’ve seen far worse. Of course, you should use your own best judgment when it comes to your children.

* According to my friend Dave, anyway.

** Those of you following me on Twitter have noticed that I’ve been pretty much live-tweeting the episodes I watch on my lunch breaks.

*** Coincidentally, there was a character named Knox in Burton’s Batman.

**** Pretty much what Wesley’s been doing with Fred’s signals for the past few episodes in a parallel/irony storyline that absolutely no one failed to see coming except Wesley himself.

***** The lovely and talented Jenny Mollen, who has been married to Jason Biggs for just over four years now — and who, at the time, apparently didn’t mind appearing nude on the show (it made sense for the character, but still — pretty damn revealing despite careful camera work and hand placement).

****** I do wonder if Andy Hallett was controlling the puppet in the scenes where he carried him; I’m sure someone on the internet knows.

******* You may also recognize him as one of the newscasters in Dr. Horrible as well as the Mustard Guy in “Once More, With Feeling”.