The following review contains spoilers for the first three Highlander films and the television series.

What do you do after your 1986 movie achieves cult status? Well, if you’re lucky, you get to make a sequel. When that sequel bombs, you get to make another sequel. If the third film bombs, maybe you’ll be lucky enough to get your intellectual property turned into a TV series that gets passable ratings and hangs around for six years — long enough to justify a fourth film in the series.

In other words… someone made Highlander: Endgame, the fourth movie in the series. And I watched it. More than once. 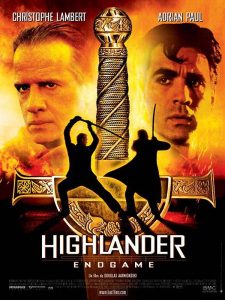 Although set in 2002*, four years after the end of Highlander: The Series, the film actually begins in 1992, when Connor MacLeod arrives at his New York shop/apartment just in time to see it blown up, taking the life of Rachel Ellenstein, the young girl he adopted during (I believe) World War II. Devastated that he’s lost everyone he loves, Connor joins up with the Watchers, a group dedicated to chronicling the lives of the immortals, and agrees to go into the Sanctuary. There, the Watchers keep several immortals out of The Game (the worldwide headhunting competition with a nebulous “prize” to go to the last survivor) so that no one can be the last.

Now, in 2002, Duncan MacLeod (Connor’s cousin and friend) is still secluded, meditating, trying to find himself after (in the series) killing his protege Richie and getting the It’s a Wonderful Life treatment from Roger Daltrey**. He has a prophetic dream and visits his friend Methos, the oldest Immortal on the planet, before heading to New York to see if he can figure out what happened to Connor ten years ago. Way to wait around, my friend.

Meanwhile, the villain of the piece, Jacob Kell, goes to the Sanctuary and kills all the immortals there with the exception of Connor — I’m still not sure how he escaped, or who let him free. Kell is powerful and ruthless, and he hates Connor for killing his mentor, while Connor hates him for killing his mother. Kell and his guys go to New York and face off against Duncan, but the only death is from Kell, who kills one of his henchmen. Shortly after, Duncan is sent to the Sanctuary, only to be rescued by Methos and his (Duncan’s) Watcher, Joe Dawson. They explain that Kell has killed 661 Immortals, more than Duncan and Connor combined.

Eventually it’s revealed that Connor is still alive. We see several adventures of Connor and Duncan in the past, including when Connor taught Duncan the “unbeatable move” — one would think he’d have used that at some point in the last three films. But anyway. Things come to a head between the MacLeods and Kell, and as we know, there can be only one.

In addition to a spectacularly-ancient-looking Christopher Lambert as the supposedly-immortal Connor MacLeod, Shelia Gish and Beatie Edney reprise their roles (however brief) as Rachel and Heather (the latter being Connor’s first wife, from the 1500s). However, top billing goes to Adrian Paul, star of the Highlander television series, now sporting short hair. Paul is as good in the film as he is in the series — a sort of cardboard boy-scout good-guy character with very little darkness in him despite everything he’s done. Kell is portrayed by Bruce Payne (great name there) and unlike the villains of the previous two films he’s not a cutout. He actually has a good reason for hating Connor. He’s also kind of nuts.

There’s quite a supporting cast in this film, which is topped by Lisa Barbuscia, a model and musician. She plays Kate, who, in the 1700s, was Duncan’s wife. However, she was also a pre-Immortal. Now, in 2000, she is fashion designer Faith and she is wicked pissed at Duncan for making her Immortal and depriving her of children. Good motivation. Donnie Yen is the most honorable of Kell’s henchmen, Jin Ke. Peter Wingfield and Jim Byrnes reprise their roles from the series as Methos and Joe Dawson, and there’s a special appearance by Adam Copeland, better known as the WWE’s “Edge”. Interestingly, “Edge” got a “special guest star” mention in the credits, because as we all know that sort of thing will bring in all the wrestling fans.

For what it’s worth, he didn’t suck in his brief role, although one wonders why a Canadian-speaking rogue was hanging out in Kildare, Ireland.

Oh, and one other weird piece of casting — June Watson, who played Connor’s mother, looked an awful lot like Stanley Tucci’s weird cohost in The Hunger Games. It was distracting.

If you take Highlander: Endgame as a straightforward action film and don’t care about the plot, I think you’ll be satisfied. Unlike Lambert, Paul is actually capable of moving in the way martial artists have to (he’s a dancer), and he also spent six years doing martial arts and swordplay on the TV show. Plus, Donnie Yen choreographed the martial arts for the film. The fights in this movie are faster and crisper, and the cinematography is better; in this alone the film is elevated above the previous three. However, Connor still gets his moment as awesome swordsman dude by teaching Duncan the unblockable attack I mentioned earlier. Now, I’m not a swordsman by any stretch of the imagination, but I can think of at least three ways to get out of the move, not the least of which is to duck, you idiots!

One thing I did like about the fighting was the contrast between Connor’s and Duncan’s styles — Connor, while a good swordsman, is definitely a dirtier fighter; Duncan prefers to keep it clean. We do get the fight between the two of them that people have been waiting for since the pilot of the TV show, though.

The writing was about as good as an episode of the television show — Connor got the good quips; Duncan didn’t. Duncan never really struck me as a quippy kind of guy anyway. In what was supposed to make the viewer go “ah-ha-HA, indeed!”, Kell had 661 kills at the start of the film. Which meant he almost had 666. Given that he was trained as a seminarian, it’s supposed to be ironic. But it wasn’t.

Because this was a Highlander movie, we had to have at least one sex scene with nudity. This time, it was awarded to Paul and Barbuscia. I’m not quite sure of Faith’s motivation to sleep with him after she lays into him with a wicked tongue-lashing***.

Set design and music were again about average, although I really got tired of the Scotland Enya-style music — it always makes me think of this song from the Toys soundtrack. The original ending had a really bad composite shot of one of the heroes standing at a grave before walking off into what was supposed to be the moors of Scotland, and I wasn’t thrilled to be leaving the movie with that shot — which is why I’m glad there was a director’s cut released with a slightly better ending.

Highlander: Endgame was in development hell for a while, and it shows. It went through several cuts and rewrites, leading to a subpar finished product in pretty much everything except the fight scenes that featured Duncan, and the conclusion of the Connor/Duncan battle. Christopher Lambert was getting too old for the role, and anyway he’d passed the torch in the TV series. This was not a good movie, and if you’re not a Highlander fan, you probably won’t like it. Even if you are, make sure you see the director’s cut so you can get the better ending and a few more scenes that make the plot work better.

I remember being pretty disappointed in the movie when I finally saw it (on DVD). It felt more like a two-parter from the series, and really, that’s what it should have been. It completely ignores the second and third films**** in favor of the TV show’s mythos — which is good, but not if you’ve never seen the show. It’s written without explanation of the Watchers or how Joe and Methos are Duncan’s friends, and there’s no time in the film to give anyone a really decent character arc except Kate/Faith. At least we could all take heart that this would be the last of the…

Looks like it’s time to dig up my digital copy of Highlander: The Source, then.

Note to Parents: As with the other Highlander films, this movie contains violence (including decapitations), nudity, adult language, and adult situations. At least in this one the sex scenes actually flow with what little plot there is, whereas in the last one it was just indulgence on the part of the director and star. I think this could be handled by most older teens, as long as they don’t get all tittery***** about nude women on film. Of course, you should use your own best judgment when it comes to your children.

* The first present-day scene in the film actually happens “ten years ago”. If Connor and Duncan last saw each other in the pilot of the series, which was 1992, then the earliest the film could possibly occur was 2002. Since the technology was pretty much present-day for the film’s release, I’m saying it’s in 2002. You can dispute me if you like.

** It actually makes sense on the show. Don’t try to figure it out right now.

*** No pun intended. This was the 00s; heroes in film didn’t regularly engage in oral sex at the time. That didn’t come — oh, shut up — until a few years later.

**** With the exception of some good bits from Sean Connery, everyone should ignore the second film.