One of the things I love about my job is that, as long as we get our work done, we can occupy the free bandwidth in our brains however we like. Some of us listen to music, some of us watch Netflix, and some of us just work. Usually I listen to music, but recently I was walking into work and whistling the theme from Snoopy, Come Home* and decided I wanted to watch it on YouTube (which I’ve done before) while I worked.

I think we all remember the tragedy that was the second Highlander film. I certainly do. I mean, I’d just seen it two days prior. When the third film came out, I decided I liked the story enough to see H3 in theaters. Yeah, that’s right, I spent my hard-earned $6 on a ticket to the movie. 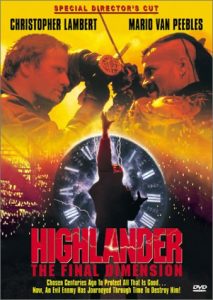 For those of you living under a rock, Highlander is the story of Connor MacLeod, an immortal Scotsman who, like others of his kind, fights with a blade and can only be killed by decapitation. Otherwise, he doesn’t age and can’t be hurt. In the first film, he thought he won “The Prize” by defeating Kurgan, the man who killed his best friend Ramirez and then raped his wife, back in the 1500s. Now, eight years later, MacLeod is living in Morocco with his friend Jack and his adopted son John. He feels a disturbance in the Force and realizes that, although he won The Prize, he hasn’t killed all the immortals on the planet.

In the 1600s, after his wife’s natural death due to old age, MacLeod wandered the world, eventually ending up in Japan, the home of the legendary sorcerer and swordmaker Nakano. MacLeod trained with Nakano and earned the power of illusion (which for some reason he didn’t use in the first two films — go figure, right?), but when the evil immortal Kane and his two henchmen arrived, Nakano sacrificed himself to save MacLeod’s immortal life. Nakano used his power to trap Kane and his henchmen for 300 years, until an archaeological expedition unearthed Nakano’s cavern. Kane escaped and came after MacLeod.

As with the first (and fourth) Highlander film, MacLeod’s story is told twice — first in the present, and also in the past. This time, it’s the French Revolution, when MacLeod is introduced to Sara, a free-spirited young woman who he is sent to “tame”. Sara bears more than a passing resemblance to Dr. Alex Johnson, the archaeologist who found Nakano’s tomb. MacLeod deeply loved Sara, and in the present, he falls in love with Alex. However, Kane’s thirst for vengeance leads to death and destruction in New York City, and both Sara and John (MacLeod’s son) are placed in great peril.

I think you can figure out how the movie ends.

Christopher Lambert returns to portray MacLeod. Of French descent, Lambert’s accents are meandering at best — he’s an okay Scotsman, but otherwise he speaks in what I assume is his normal voice. He does a good job with the swordfighting and action sequences, and he delivers the requisite quips as any good 90s actor should. Plus, at the time he was still young enough to convincingly portray someone who hadn’t aged a day in eight years. Makeup probably helped. His foil, Kane, was played by Mario Van Peebles. Highlander villains tended to overact, and I get the feeling the director told Van Peebles to emulate Clancy Brown (the villain in the first film) as much as he could. Gravelly voice, leering expression, strange tongue movements, the whole bit. If that was the direction, then he pulled it off admirably. As a teenager, I bought him as a villain, but watching the film 20-ish years later, I need more from my Big Bads. For starters, they need to have better motivation than “I’ve hated you for 400 years”. Deborah Unger, who’s in Combat Hospital but otherwise I didn’t really recognize, is both Alex and Sara, and she, like Bonnie Bedelia [NB: Roxanne Hart, not Bonnie Bedelia. Sorry about that.] in the first film, does a fine job as The Girl.

I think the best adjective for this film, overall, is “passable”. The music was passable; the plot was passable, the acting was passable, the obligatory montage***** was passable, the special effects were passable (for the time)… the sets and production design were cool, and the swordfighting was as good as to be expected in the Highlander films, but nothing else really jumped out at me as being exceptional. I wasn’t terribly invested in the love story (either of them), the villain, the historical sequences (it was the bloody French Revolution; I expect they could’ve done a lot more with that part), or MacLeod’s adopted son. And, I mean, as a 16-year-old, the nudity was awesome, but these days I don’t really need it, and as a 30-something, I’ve seen it already.

But, y’know what? I think that’s all okay. Because if you go into this film expecting a great movie, you’ll be sorely disappointed. There’s a lot of overacting, some silliness with magic and illusions (humans turning into birds, anyone?), and the requisite “asshat policeman” villain. But if you liked the first Highlander film and you can put aside the fact that it was set up to be a single film with no sequels, you’ll enjoy this movie too. I got what I came for when I went to the theater, and watching it in the background while I worked gave me what I came for as well — a film I’ve seen enough times that I didn’t have to actively watch it, and something going on in the background to fill my mental bandwidth.

I know some people say there should have been only one, but if there had to be a sequel… I think this was pretty decent.

Note to Parents: This film contains violence — including decapitations — as well as adult language and sexual situations. Compared to today’s films, it’s not that graphic, and if it wasn’t for the nudity, this film would probably get a PG-13, not an R. I kind of think Lambert has it in his contract that all Highlander films have to have at least one over-long sex scene, and this film definitely has that too. The sex scene is what pushes this past the limit of “allowable content” for teens, in my opinion. Of course, you should use your own best judgment when it comes to your children.

* You can watch the whole thing on YouTube here.

***** In this case, sword-making, set to Loreena McKennitt, because that just screams Scotland, doesn’t it?