This review contains spoilers for the Buffy: the Vampire Slayer television series.

If you follow me on Twitter (@listener42), then you know I use the app GetGlue to play a FourSquare-like game with the media I consume. And, for the last six months or so, you’ve observed many quotes from Buffy the Vampire Slayer as I finally got around to watching a series my college friends told me was something I should see.

This isn’t a review of the show — I’ve saved that for the 15th-anniversary retrospective that’s being posted this week. Instead, it’s a review of the soundtrack to the musical episode “Once More, With Feeling”, which I received last month and loaded onto my phone. 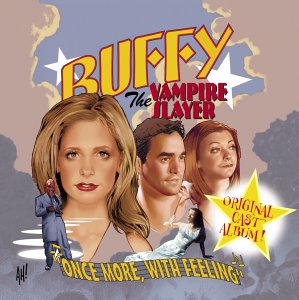 Yesterday*, I was having kind of a bad day, and I had a long drive ahead of me. So I figured I’d put on some music that had good associations. See, I really liked the Buffy series, and “Once More, With Feeling” was a really good episode — on Facebook, my friend Dave said, “to this day I consider this to be the greatest single episode of a series I’ve ever seen”, and while I’m sure I’ve seen great single episodes before, I can’t think of anything at the moment to contradict his statement. And, according to the episode’s Wikipedia page, the critics tend to agree.

I think the soundtrack works best if you have fond memories of the show, or were significantly affected by it. For me, one of the most emotional arcs of the show was Willow and Tara’s relationship — beginning with the episode she chooses Tara over Oz, and ending with Tara’s accidental death at the hands of Warren Mears. I was particularly moved in the episode following Tara’s death, “Villains”, when Willow invokes the god of death to try and undo what was done to the person she loves. Tara’s death occurred after she reconciled with Willow following a breakup, and that breakup happened shortly after “Once More, With Feeling”. (Trust me, all of this will be relevant in a paragraph or so.)

So, in the beginning, I got a few laughs out of Sarah Michelle Gellar’s opening number, “Going Through The Motions”, and I actually thought I’d have a nice Saturday afternoon drive. Although Gellar’s voice occasionally sounded thin, I remember being surprised at how good she did with the song — which explained how empty she felt about her life after being resurrected in the beginning of the season**. “Motions” was followed by a medley featuring solos by Anthony Head (Giles) and Emma Caulfield (Anya), and again I found myself laughing along with Caulfield’s rock anthem about her dislike of rabbits.

Bunnies aren’t just cute like everyone supposes.
They got them hoppy legs and twitchy little noses,
And what’s with all the carrots?
What do they need such good eyesight for anyway?

I guess you had to be there.

The third track was equally amusing — “The Mustard” — which is a 19-second declaration that the dry-cleaner got the mustard out of producer David Fury’s shirt.

And then things took a turn for the sad, because Amber Benson (Tara) began her first solo, “Under Your Spell”. The song is actually pretty happy on the surface, and if you haven’t seen the episode, you may not know that, just before it, Willow and Tara argued about Willow’s increasing usage of (and dependence upon) magic. Benson has a beautiful voice — an unexpected joy, given her character’s soft-spoken manner — and she spends several minutes serenading Willow. She ends with a verse that could be considered a little dirty, but is still kind of sweet:

Because of what happens through the rest of Season Six — the fight, the reconciliation, the death — I found my throat getting a little tight*** as I listened to the song, and I think that set the mood for the rest of the album.

On the heels of that song comes the duet “I’ll Never Tell”, where Xander (Nicholas Brendon) and Anya sing to each other about the things that niggle at their seemingly-perfect relationship. It’s a hilarious song which, among other things, rhymes the words “Scoobies” and “rubies” with the words “tight embrace”. Brendon isn’t the best singer in the group (by a long-shot), but Caulfield carries the song for him, and anyway it’s more about his lyrics than his abilities.

X: Is she looking for a pot of gold?
A: Will I look good when I’ve gotten old?
X: Will our lives become too stressful / if I’m never that successful?
A: When I get so worn and wrinkly / that I look like David Brinkley?

One more interlude follows that song — producer Marti Noxon lamenting “The Parking Ticket” she receives — before things get serious. There’s a great scene with Spike where he fights the urge to sing and dance before being forced to succumb — “Rest in Peace”, in which Marsters channels the rock gods of the 70s and 80s while still sounding like a small-theater performer. He’s not an amateur, but he’s no Anthony Head.

We move on next to “Dawn’s Lament” and “Dawn’s Ballet” — Michelle Trachtenberg, trained as a dancer, has a very thin soprano voice, but she dances her feelings instead. The Dawn songs are followed by “What You Feel”, where Tony Award-winning guest star Hinton Battle explains that he’s going to be taking Dawn back to Hell to be his bride, and that he’s the one who’s been making people sing and dance.

Next, we go back to the Scoobies: Anthony Head (Giles), who is a rather talented musician and singer, doesn’t seem to hit his full potential in “Standing”, although he definitely excels in his duet with Benson (“Under Your Spell/Standing — Reprise”). Again, Whedon’s writing to this point in the series strengthens the emotional connection viewers (and listeners) feel with the song: Giles is going to leave Sunnydale because he feels he’s standing in Buffy’s way, and Tara is going to leave Willow because she’s been lying about her addiction to magic usage****.

The next song, “Walk Through The Fire”, is an ensemble/”get ready to fight the villain” montage number, led by Gellar (again her voice is a little thin and her singing feels flat — although she’s supposed to feel unemotional so I guess it was a character choice). Eventually everyone joins in, and Hannigan receives the line of the day with “I think this line is mostly filler” — I wonder how long it took Whedon to come up with that. It’s followed by the most plot-filled song of the episode, “Something to Sing About”, when Buffy reveals to everyone (except Spike, who she already told) that, when Willow resurrected her from the dead, she pulled her out of heaven.

There was no pain,
No fear, no doubt
Till they pulled me out
Of heaven.

So that’s my refrain.
I live in hell
‘Cause I’ve been expelled
From heaven.
I think I was in heaven.

Spike, who over the past twenty or so episodes has been getting closer to admitting (to himself and to others) his feelings for Buffy, saves her from dancing herself to death, and then Xander admits that he summoned Sweet (the demon played by Hinton Battle) because he wanted to know if he and Anya would have a happy life together. Sweet reprises “What You Feel” and then disappears.

The episode ends with “Where Do We Go From Here?”, a final ensemble where everyone sings about the way their relationships have changed, and closes with “Coda”, where Spike and Buffy kiss for the first time.

Though the episode itself was excellent, the soundtrack was more effective (in my case) because of the emotional associations with the material. Fans of Buffy will definitely enjoy listening to this, although casual watchers may not get the same level of appreciation. As far as the material itself, the songs are arranged and ordered in such a way that the weaker offerings are interspersed with the stronger. If we could’ve had Benson knock it out of the park with the opening, I think that might have worked a little better, but it wouldn’t have been germane to the primary plot — that Buffy feels nothing since leaving heaven and can’t admit it to anyone except Spike, who she’s supposed to hate (but doesn’t, not really) — I can understand why Whedon didn’t go that route. Still, if for no other reason than to hear “Under Your Spell”, “Under Your Spell/Standing — Reprise”, and “Walk Through The Fire”, I am definitely keeping this soundtrack on my phone. I might get a little teary-eyed driving to work someday soon as a result, but you know what? I don’t care.

Because I am drawn to the fire. Apparently, some people will never learn.

Note to Parents: I’d rate this soundtrack a very light PG for mild language (mostly “hell”) and thematic elements (death and sex). Of course, you should use your own discretion when it comes to your children.

** At the end of Season 5, Buffy sacrificed herself to save her sister, jumping to her death to destroy a portal to a Hell Dimension.

**** I realize that pretty much every TV show has to have a character addicted to some kind of drug or behavior — alcohol, gambling, sex, painkillers, whatever — but I never really liked the “Willow’s addicted to magic” storyline. It seemed a bit forced in there just to give us some additional tension. The tension was necessary — up until the last quarter of the season, The Trio wasn’t really that great of a Big Bad in terms of villainy — but I almost wish we could’ve had something else (besides Dawn’s kleptomaniacal cry for help, which also was pretty annoying).