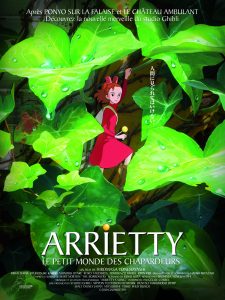 As with Totoro and Ponyo, Miyazaki’s writing is most definitely age-appropriate: Shawn and Arrietty say the kinds of things kids their age would say, and they behave in the correct fashions. This particular film is set in a contemporary Japan, as evidenced by the delivery-man using a cellphone and the exterminator (I believe) using a tablet PC**. However, the country home belonging to Hara is definitely old-world — the appliances are serviceable, but probably belong in the latter half of the 20th century (especially the refrigerator, made by the S M E G corporation), even if there’s some Corn Soup that looks an awful lot like Campbell’s. It’s interesting to me that, if the setting is contemporary, why doesn’t Shawn have a mobile phone, but perhaps it’s part of his family’s “get back to nature and rest before your surgery” strategy. Shawn seems content to lie in bed and read, or relax out in the meadow with the cat.

The setting is wonderfully detailed, from the “if you’ve seen any anime, you’ve seen and heard this” kind of meadow to the items cluttering up Hara’s house. Plus, the world of the borrowers is fully-imagined, with all sorts of stairs and walkways in the inner walls and floorboard areas of the house. Arrietty’s home is full of the kind of things you’d expect a home owned by tiny people to have, and they’ve even hung photos of the seaside outside the windows to make the place look more attractive. Arrietty’s bedroom is full of greenery, which is an interesting choice but doesn’t get called back as the character progresses — it’s more like “oh, she likes green stuff”, not “she has a special relationship with nature”.

Character design was pretty much “standard Miyazaki” — Shawn looked like Sasuke from Ponyo, Arrietty looked like the princess in Mononoke, Spiller looked like Mei from Totoro, and so on. My daughter kept trying to reconcile the appearances of Shawn and Sasuke, actually making up stories about Sasuke being grown up and hiding from someone or something.

I was less impressed with the music in this film than I’ve heard in other Miyazaki endeavors. Joe Hisaishi isn’t the composer; instead, it’s French composer Cecile Corbel. Corbel sings throughout the film, although Bridgit Mendler (the actress who plays Arrietty in the dub) performs one of the songs. The music didn’t stick with me, and didn’t seem to have a major hook to it in the same way that Totoro and Princess Mononoke did.

The voice acting was average for a dubbed Miyazaki film. Mendler and David Henrie (as Shawn) did a fine job in their roles, although Henrie had less to do because he really could only emote a few different ways. He had to sound tired and weak all the time, which can limit the emotion in a performance. Amy Poehler and Will Arnett play Arrietty’s parents, Homily and Pod (respectively), and again the female in the pair got the lion’s share of the work. Poehler was better than Tina Fey was in Ponyo, while Arnett mostly just had to grunt and speak in a soft and fatherly fashion. Carol Burnett was the “venerable actor” cast in the film — think Pat Carroll in Totoro or Betty White in Ponyo — but her character, Hara (Haru in the Japanese script), is very much a caricature, overblown and excitable, and while I heard traces of Miss Hannigan, I didn’t hear anything special out of Burnett.

When it comes to the plot, the only place I felt the film really stumbled was when Shawn and Arrietty discuss death: Shawn has come to terms with the fact that his heart condition could kill him, while Arrietty is afraid of the death of the borrowers as a whole. I kept wondering when the scene was going to end. It was well-written, and a good exploration of how children deal with the foreknowledge and reality of death, but it was very slow and didn’t work amid the rest of the film.

Overall, I found The Secret World of Arrietty to be a good film for kids. It’s not too violent, there’s no on-screen death, the subject matter is age-appropriate, and the good guys win (mostly because there really aren’t any bad guys of note other than Hara, and she’s not too malicious). The ending is a little sad, and I felt like it could use a little more than what we got, but my daughter was fine with it. She told me afterward that she enjoyed the film, and wanted me to get it on Netflix.

So, y’know, if the word of a five-and-a-half-year-old is good enough to make you go see a movie, there you are. But if you’re an adult who likes anime, I’d wait on this one; it’s not worth the cost of a movie ticket, not these days. From an adult perspective, it was just too average to wow me.

Note to Parents: This film is rated G. There is nothing objectionable, other than the existence of tiny people living in the walls of an old house. So, if magic and/or homunculi are your hot-button issues, you’ll probably want to skip the movie. Of course, you should use your own discretion when it comes to your children.

** It may have simply been a clipboard; it was only on screen for a few seconds, and rarely were those seconds consecutive.