The following article contains spoilers for both the novel and filmed versions of The Girl with the Dragon Tattoo. It contains discussions of adult material contained in both. Reader discretion is advised.

This is the first part of a two-part article.

I’m not quite sure how it happened, but Stieg Larsson’s novel of murder, intrigue, history, and hacking, Men Who Hate Women (published in the U.S. as The Girl with the Dragon Tattoo), became a nationwide best-seller.

Well, okay, I know how it happened. It’s a good, interesting book. But compared to other popular American authors — Grisham, Roberts, Connelly, Reichs, and so on — Larsson’s style of writing doesn’t really fit. The first hundred pages are a combination of dry-as-dust infodumps about Swedish financial journalism interspersed with a somewhat-clinical account of an intelligent young woman trapped in the Swedish social work system. Readers have to deal with dozens of characters, many with names they’re not used to reading. The setting is probably unfamiliar. The characters’ motivations are often unexpected.

Still, for whatever reason, Dragon Tattoo became a sensation in the U.S. It was only a matter of time until someone made a film of it. 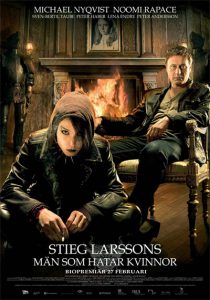 The thing is, someone already did. And that someone is Niels Arden Oplev, a Swedish director. [NB: He’s actually Danish. Sorry about the mix-up.] The cast? Swedish. The setting? Sweden. The language? You guessed it: Swedish.

I first saw this film in 2011, after I first read Dragon Tattoo and its sequels (I’ve since seen all three Swedish Millennium movies*). I thought it was pretty darn good, and that it was a decent interpretation of the novel.

And then it was announced that David Fincher, an American director probably best known for Fight Club and Se7en, would be helming an English-language version of the film.

Now that I’ve seen both versions of the film, I can actually say that they’re both good adaptations, although both have their downfalls.

Let’s start by comparing the American film to the novel, because the movie is an adaptation of the book, not of the Swedish film. And, just in case you didn’t catch it before, here there be spoilers.

I think, for starters, my biggest problem is the way Lisbeth was characterized in the movie. I just finished reading the book for the second time, right after I saw both versions of the film, and in the American version of the film I was quite surprised at just how heavily they played up a throwaway line in the book, about how Blomkvist muses that Salander might have some form of Asperger’s syndrome. Maybe she does; maybe she doesn’t. But in the book, after the climax — Salander saving Blomkvist from Martin — there’s another hundred pages or so of the two of them getting closer. They spend several weeks together piecing together Wennerstrom’s evildoings — the stuff Vanger just hands over to Mikael in the film is actually pretty well-researched by Lisbeth in the book — and it’s clear that Lisbeth cares for him. In fact, she actually admits to herself that she thinks she’s in love with him.

Other than that, there wasn’t a ton left out from the book, and anything that was wasn’t necessary. The film starts after Blomkvist has been convicted and sentenced — in the book, he has a three-month jail sentence, but I didn’t mind so much missing that, especially since we would’ve needed an infodump on the Swedish criminal justice system (which we’re going to get anyway in the third film, should it be made). Some shortcuts were taken in the film vis a vis Greger Vanger, and Mikael’s relationship with Cecilia wasn’t included but it also wasn’t truly necessary except to cement Mikael’s position as a ladies man. Also, the book spends much more time on hacking, and how important Plague is to Lisbeth’s activities as the hacker “Wasp”, but I can understand why that was left out of the film — too complicated.

Oh, one other interesting small note: in the book, it’s noted that Lisbeth is a redhead with dyed-black hair. In the American film, we can see Lisbeth’s light eyebrows — the actress has light hair, so it works. (In the Swedish film, the actress has dark hair, and I guess it wasn’t important enough to lighten her eyebrows. Or anything else.)

The ending was substantially changed, as I’ll discuss again when I compare and contrast the two Harriet Vangers. I wasn’t unhappy about it, and it did make sense.

Now, to compare the two films; that’s a horse of a different color. A lot of it is contained in characterization and writing, but I’ll be saving the characterization for later. The most notable differences (other than the scene, which I’ll talk about at the end of the article) include:

I do want to go back to the bit about Mimmi: in the book, enough explanation is provided for us to understand that Lisbeth isn’t gay, although in both films the fact that she’s with Mimmi so relatively-soon after the Bjurman atrocity makes the viewer think she is, thereby making viewers even more sympathetic. However, in the book the situation is clearly explained and also sets the stage for future books by establishing Lisbeth’s friendship with a group of like-minded rocker girls. It also makes her night spent with Mimmi much more sensible; in the Swedish film, she just slept with a girl, no explanation, and in the American one we see her hit a club but we have no idea that she has any history with this person. In short, what was a well-established scene becomes nothing more than shock value.

Finally, the ending: in the book, Martin simply crashes his car into a logging truck and is killed on impact. Unfortunately for filmed audiences, this wasn’t enough. In the Swedish film, Lisbeth sees Martin’s car go over an embankment and then she watches as it catches fire. She later admits she would’ve been able to save him, but chose not to.

The American version, though, I think suffered from the need for American audiences to have a hero who kills the bad guy. After Martin runs, Lisbeth takes his gun and chases him. He crashes his car in front of the convenience store in Hedestad, and that’s where Lisbeth finds him. She cocks the gun, is ready to shoot… and then the car catches fire and explodes. Lisbeth, therefore, doesn’t actually get to do it, although she does witness it (as with the Swedish film). Before she takes the gun, though, she asks Mikael’s permission to kill him. Clearly he deserves it — he’s a multiple murderer — but the line felt kind of lame to me, as if we needed to have a quip to lighten the mood.

The mood didn’t deserve what was done to it.

If you’ve been reading the EP blog for a while, you know I notice music in films. The Swedish film had pretty much just incidental music — nothing really special — but for the American version the producers hired Trent Reznor and Atticus Ross, and they did not disappoint. A combination of traditional and modern soundtracks, both hard rock and symphonic. I was a little surprised by the remake of the Bryan Ferry song “Is Your Love Strong Enough?”, which I first heard in the Threesome soundtrack (one of my all-time favorites), playing over the credits, but I guess it made sense given the ending.

Clearly Fincher had a lot more money to work with than Oplev, and he put it to use. Although both films take place in Sweden, and both were filmed at least partially there, the Fincher version is darker, grittier, and more realistic. It had a Fight Club vibe to it. The Swedish version, to me, felt more like a movie than an actual place, even though I’m fairly certain that Oplev did a lot more location shooting simply because he is from the region (he happens to be from Denmark). IMDB indicates that, with the exception of the ending sequence, all of the Swedish version was filmed in that country, while the U.S. version was filmed primarily in Sweden but also partly in the U.S.

The most obvious use of non-location shooting I observed was the scene in which Frode talks to Blomkvist in the cabin; if you look carefully at the wall behind Frode (I believe the refrigerator is to his left, our right), it moves in an odd way, suggesting to me that it wasn’t really there. Perhaps the cabin was at a movie studio in Sweden, but it wasn’t a real cabin.

The film — and translated book — is named The Girl with the Dragon Tattoo for a reason: Lisbeth Salander has a dragon tattoo. In the book, it definitely plays a part; in the Swedish film, it’s a massive thing on her back that goes all the way down one leg and we see it every time we see her with her clothes off.

But where is it in the American film? When Lisbeth was in the shower, or having sex with Mikael, I can barely remember seeing it. It’s the name of the movie; shouldn’t we get a good look at the thing? And when we did, it seemed so much smaller than it should have been.

I think, perhaps, that was what most disappointed me about the American version — it was more about the core idea of the book (Men Who Hate Women, its original Swedish title) than the tattoo itself. However, no one would’ve understood if the film was called Men Who Hate Women; the book phenom is The Girl with the Dragon Tattoo, so calling the movie something different would’ve been an epic failure to capitalize on its popularity — something definitely necessary, given how hard it is for R-rated films to make as much money as PG-13 ones.

Part two will cover casting, characterization, and the scene. You know the one.

Note to Parents: These films — and the book — contain graphic violence, explicit language, explicit sex, and rape. I usually say you should use your own discretion when it comes to your children, but I hope that, in this case, I don’t have to.

* Millennium is the name of the magazine where the main character, Blomkvist, is a writer. The entire series is sometimes referred to as the “Millennium Trilogy”.

** Since I wrote the various parts of the article out-of-order, I apologize in advance if some of it seems a bit repetitive later on.