I’ve never seen the stage version of Wicked, but when I saw the book in the bookstore, I bought it and read it. I’ve always enjoyed Oz, from the original film to the original Baum books to the newer retellings (Tin Man, The Wiz, etc). And I enjoyed Wicked.

I didn’t really care for Son of a Witch, and I thought A Lion Among Men was pretty blah, but since Out of Oz was supposed to be the conclusion of the Gregory Maguire “Wicked Years” series, I figured it was worth taking a look. 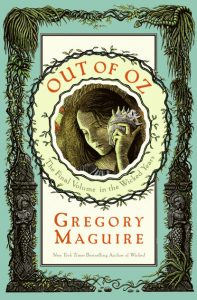 All of the Maguire Oz books start slow — very slow — and take many years, if not decades, to complete. They get good toward the end, but getting there is a long, sometimes arduous journey. Out of Oz was no different. It begins with a very long Dorothy story, sending her back to Oz so she, along with pretty much everyone else we’ve known along the way, can be in the book. Maguire included dozens of Oz characters — many in passing mention only — that readers of the Baum novels might recognize, including Jellia Jamb, Jack Pumpkinhead, and even the Woggle-Bug. But for the most part, this book focuses on Rain, granddaughter of Elphaba (the Wicked Witch of the West) and daughter of Liir (the son of a witch) and Candle (a Quadling with the power to see the present).

The beginning of the novel, to me, was quite off-putting — it jumped from Rain’s long-lost memories to the Time Dragon to Glinda and back again until, finally, the plot got on track. It turns out that, sometime between the end of Wicked and the end of A Lion Among Men, Munchkinland seceded from Oz and took with it the nation’s largest source of fresh water, a lake mostly in Munchkinland territory called Restwater. The first act of the book takes place in and around Glinda’s country home — she is now the Lady Chuffrey and a former Throne Minister (president) of Oz. Soldiers usurp her home and lands in their attempt to take Restwater back for Oz, and it is at this point we meet Rain, who is a young girl sweeping the floors. We don’t know why Rain is important; we just know that she is.

Eventually Rain departs Glinda’s home with the Time Dragon — a machine important to the three previous books, run by a dwarf named Mr. Boss. With the Dragon we find Brrr (the Cowardly Lion), his wife Ilianora (daughter of Elphaba’s baby-daddy Fiyero), and the Grimmerie (a magic book that Elphaba once owned, now locked safely away in the Dragon). The travelers end up in Quadling Country (the south of Oz) and spend a year there* before finally meeting up with Liir and Candle, where Rain gets the whole story of her life.

The second act of the book focuses mostly on Rain, with detours into Dorothy’s trial for murder (she did, after all, kill two women the last time she was in Oz), and also introduces the character Tip, a boy about Rain’s age (maybe slightly older). I think you know what will happen between the two of them, so I won’t spend a lot of time on it except to say that, if you’ve read the Baum books… well… what happens to Tip is pretty similar when you compare the Baum books to the Maguire ones.

Act three is the grand finale. I can’t tell you much about it, except to say that after the climax the book goes on for another 100 pages** before ending in what, to me, was a rather unsatisfying fashion. I don’t need a happy ending, but I want to be satisfied.

As with the previous Oz books, Maguire does a masterful job tying his own interpretation of Oz into the Baum version. As someone who’s read about twenty of the original Oz books***, I appreciated the inclusion of events and characters from the original stories. I wasn’t surprised by what happens to Tip because I’d read it before, although I was waiting throughout most of the book for it to occur, so that was interesting. His worldbuilding is excellent, as is his characterization, and never once did I feel that I had learned either too much or too little about a place or a character. It’s also very funny in places — especially the parts with Daffy and Mr. Boss.

I think my biggest problem with the book was its time-scale. I realize that makes me somewhat of a hypocrite, given that my favorite book takes place over about the same scale (ten or so years) and its sequels occur almost twenty years after that, but there was just something about the way Maguire cavalierly tossed off “a year passed” or “a year later” that turned me off to the story. It took away from its urgency, and in a book that takes place against the backdrop of a nation at war, that is problematic for me. Also, as I said, I found the coda (the part after the climax) unsatisfying.

All in all, I found Out of Oz to be a good book, mostly enjoyable and mostly interesting, although it definitely wasn’t as good as Wicked — which, admittedly, suffered from many of the same problems. If you’ve read the other three Wicked Years books, you’ll probably like it just as much as you liked those. However, if you’ve only read Wicked and haven’t really wanted to pick up the others before now… I’m afraid I’ll have to suggest that you pass on them.

Note to Parents: I would rate this book a hard PG-13 or soft R. It contains lots of bad language, some violence, prurient humor, and a few sex scenes. There are mentions of self-inflicted mutilation, but it’s not actually shown, only discussed. I think teens could handle it, because none of those things are pervasive. Of course, you should use your own discretion when it comes to your children.

* There’s a fascinating treatise in the book about how time is measured in Oz, but even if you consider a year to be “four seasons: spring, summer, fall, and winter”, that’s a long time to do absolutely nothing germane to the plot.

** I have the font set pretty large on my Kindle app, and according to it, the book was 1002 pages. The actual printed novel is 592, so if I do some math, that tells me it’s actually closer to 50 additional pages. Most of it contains whining on the part of Rain, sadly.

*** Admittedly, I read them about 20 years ago, so my memory might be muddled, but I did read them.