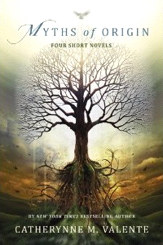 It is easy to love a book when it has been cruel to you. Myths of Origin by Catherynne M. Valente is a hard book, and one that will encourage most readers to put it down. It contains four short novels, each of which will challenge the reader to make sense of its elaborate metaphors and strange perspectives. The language in this book shows a poet’s fondness for unexpected juxtapositions. Anyone who cannot read a book simply for the beauty of the writing should not pick this one up at all.

However, those who are brave enough to read the Myths will be rewarded with four extraordinary novels. The first one, The Labyrinth, is by far the least comprehensible. Most of it seems to be happening inside the protagonist’s head. She reminds me of Alice, and her Wonderland is the Labyrinth of Crete. Whether or not there’s a minotaur in the middle is still an open question at the end, I think — there is a bull of sorts, but it’s complicated. This novel is dense and wild and does not seem to have much of a point other than to prove that a novel like itself can exist. I liked the bit with the rabbit.

The second novel is Yume no Hon: The Book of Dreams. This is the one that I was most looking forward to when I picked up Myths of Origin, though I found that the next novel in the sequence did most of what I wanted this one to do. Once again, Valente finds the connections between totally unrelated things — in this case, a wild woman living in an abandoned pagoda in the mountains of Japan, and the Sphinx of Thebes. Each chapter begins with the name of a season from the Japanese calendar of the Heian period, and most don’t last more than a page. Like Labyrinth, this book is filled with powerful images. I had a sense that if I’d spent more time studying Japanese folklore or Babylonian creation myths, I might have gotten more out of Yume no Hon.

The Grass-Cutting Sword is my favorite of the four, but also the most upsetting. It tackles the story of Susano and the eight-headed maiden-eating dragon. It also speaks to the varied cruelties inflicted on women — on beautiful women, on plain women, on obedient women, on wild women, on mothers and on sisters. Valente plays with voices in The Grass-Cutting Sword. The dragon and the eight maidens speak while sharing the same body, while Susano narrates his own story and the story of his mother. This book is bloody.

Under in the Mere proposes that California is a place where questing knights from King Aurthur’s court can go to hunt their beasts or find their grails. It matches each character from Arthurian legend up with a card from the tarot and with an overarching image — Kay the robot, Galahad the shapeshifter, and so on — and plays each image out to its furthest extreme. It quotes the relevant passages from Malory in case the reader is unfamiliar, and then takes them in the most unexpected directions. It is a fine book in and of itself, though I will admit to being tired after reading the other three.

If you can treat each of these novels as a separate piece, and perhaps take breaks between them, then Myths of Origin is a fine collection. Fans of Catherynne M. Valente should read this book, not just because it is more of her beautiful prose, but also to see reflections of ideas that she returns to in her other works. Myths of Origin is beautiful. It demands patience; it speaks in riddles. I am glad that I read it, but I am also a little bit glad that it’s over.