In beginning, Josh think it funny to write review of book Bigfoot: I Not Dead using Bigfoot style of writing. However, realize will get annoying fast and not want annoy readers. So will stop.

While I was on vacation recently, a friend of mine gave me a copy of Graham Roumieu’s third Bigfoot book, Bigfoot: I Not Dead. At first blush, it looks like a kids’ book; it’s full of illustrations and the text is artfully hand-written. It’s also a very slim volume. But she and her husband both said it was hilarious, and it’s quite short, so I figured, why not? 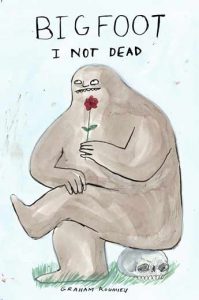 After reading the book, I can say that I should find it funnier than I actually do. The style of humor is supposed to be right up my alley — Bigfoot is written as a self-deprecating, lonely guy who just wants to be understood, but occasionally gets angry about his life or the state of the world. I did laugh a few times, but mostly I just found it generally amusing in the way one finds the comedy club emcee’s jokes generally amusing.

As the book is so short, it doesn’t really justify one of my usual 1000-word reviews, but I do want to call attention to some of my favorite bits, including:

As for the pictures: I don’t really know how to review, critique, or even react to artwork*, but I’ll give it a shot, since after all this book is illustrated: the artwork is good, and appropriately primitive-looking — after all, Bigfoot is ostensibly the writer of this book. The pictures really fit well with the narrative. The ones containing blood aren’t quite as good, I think, perhaps because that part of the narrative gets away from Bigfoot’s “trying to fit in as a person” dialogue in favor of his “I’m a giant forest creature who can bash your head in with one blow” dialogue, but overall it works quite well.

Bigfoot: I Not Dead retails for $15 USD, according to the UPC on the back. I don’t think I could pay that much for a book this short, and I’m glad it was a gift. However, I do think the book is funny enough to be worth reading, especially if you enjoy juvenile humor and/or retellings of the lives of mythic creatures. If you can find it in the library, or you’re one of those “go into the bookstore, sit on the couch, and read a book” people, why not grab all three Bigfoot books? Most folks should be able to read them all in one sitting.

Note to Parents: This is not a book for young children, despite its appearance, size, and font. It contains violence, adult language, and discussions of sex. I’d say it’s PG-13 at worst, though. Of course, you should use your own discretion when it comes to your children.

* My grandfather, now that he’s retired, has taken up art — he paints, carves wood into really amazing carnival horses (especially for someone suffering from Parkinson’s in his dominant hand), and he’s learning to play the piano. When we visited his house during Thanksgiving weekend, he showed me everything he had made and was currently working on. I tried to make the appropriate appreciative noises, but I felt like I was being repetitive. I’m certainly proud of him, and I often talk about his work when grandparents come up in conversation, but when it comes to actually reacting to artwork for the sake of artwork, I often have difficulty. I suppose members of my family who don’t read genre fiction but are forced to read my writing are the same way.