Some years ago, while lamenting Atlanta’s rush-hour traffic and the gas crisis, I wrote a blog post entitled “You Pay With Time”. Apparently I wasn’t the only person who had that idea, because Andrew Niccol (Gattaca, The Truman Show) just wrote, produced, and directed a new film where you literally do just that.

In Time takes place around 200 years in the future — possibly more; they weren’t specific. Humanity has been genetically engineered to stop aging at 25, at which point every person is given one year to live. They can then spend that time however they want — and they have to, because everything from food to rent to transit is paid for in the currency of minutes, hours, days, weeks, months, and years. Into the ghetto of this world — District 12 — is born Will Salas (Justin Timberlake, Black Snake Moan), a young man who wants nothing more than to help his mother (Olivia Wilde, House) and his friends (including Roseanne‘s Johnny Galecki, also known as Darlene’s boyfriend).

But, as with many sci-fi dystopian films and novels that start in the ghetto, the whole point is to upset the status quo. Will does just that, taking on the entirety of District 4 (where the rich people live) and gaining the attention of socialite Sylvia Weis (Amanda Seyfried, Veronica Mars). Unfortunately, he also catches the eye of Timekeeper Raymond Leon (Cillian Murphy, Batman Begins), who wants to know just how Will got his hands on enough time to move in the circles of the rich and powerful. Soon enough, Leon has used his power to send Will back to the ghetto, where he and Sylvia must work together to take down District 4, as well as save enough time to live until tomorrow. 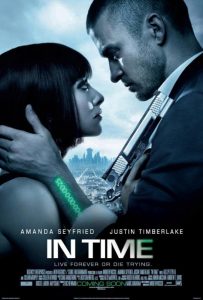 The concept of In Time isn’t particularly new, and the writing is often heavy-handed — there’s a lot of comparisons drawn to the rich/poor divide facing much of the world today, and a lot of messaging that bludgeons the audience — the very people who can afford the money and time to sit down and watch a two-hour movie about people who have no time to spend. Matt Bomer (White Collar) first brings it to Will’s attention as a rich man who’s grown tired of immortality — the very goal toward which so many people strive. Once Will gets to District 4, he does exactly what most have-nots would do when they find a wallet with $10,000 (or, in the film, 100 years) in it: gets a hotel suite, sleeps in, and eats an expensive breakfast. But Will isn’t stupid; he knows he’ll need more time if he’s going to make a change in the world, and he immediately starts stockpiling more and more time.

Once Will is expelled from District 4, we get into a lot of car chases, footraces, gunfights, and the occasional intimate scene between Will and Sylvia. But even then, there’s a lot of obvious plot couponing and a deus ex machina before the grand finale.

Other than the way he looks when he’s pretending to be sad, Justin Timberlake’s acting is pretty good; he does a decent job playing the “poor but community-minded” guy we’ve seen in many a dystopian world, and he seems to genuinely care about his mother* and the people around him. He also does well when he gets to District 4 as “poor kid makes good but it still suspicious of everyone and everything” guy. He’s not the best actor in the film, but I think he was a good choice for the role.

Amanda Seyfried, on the other hand, always seems to look like either a sex kitten or like she was just used as the clapper in an enormous bell. Her hair is too perfect, and her eyes are always wide and glassy. I’ve seen her in a few roles and I think she’s an okay actress, but I didn’t really like her in the role. I did like Olivia Wilde — despite the fact that she didn’t seem so much like a 60-year-old woman in a 25-year-old’s body — and I also thought the supporting cast did well.

The main villains of the piece are Felipe Weis (Vincent Kartheiser, Mad Men) and Raymond Leon (Cillian Murphy). Weis (Sylvia’s father) is your stereotypical “I can buy anything because I’m so darn rich” villain, and he doesn’t even really stand up to an average Bond adversary in terms of threat. He really just exists to be a pastiche of the rich corporate people that the film is standing against. And Leon, like Agent Smith in The Matrix, just wants to keep things running the way they are — at any expense. While Kartheiser isn’t given much to do — Weis really never seems to be in danger at any point in the film — Murphy manages to play his scenes with his usual aloof aplomb. The writing for his character isn’t great — and his demise is pretty lame, as he is hoist on** his own petard.

The production design and costuming of the film is pretty standard for a near-future dystopia (just slight advancements and changes in the current styles and architecture), and the soundtrack wasn’t anything notable beyond a subtle ticking clock effect in the background of most of the scenes.

Overall I found In Time to be an enjoyable film, and worth the price of admission at just under two hours. I was a tad disappointed that we had to sit through a preview for Jonah Hill’s updated version of Adventures in Babysitting, but the film quickly made me forget about it. If you haven’t seen it yet, wait for it to get to the cheap theater or DVD, unless you absolutely need to see Justin Timberlake running or Amanda Seyfried running or Olivia Wilde running or… well… you get the idea.

Note to Parents: This is a standard PG-13 film, which means light-to-moderate swearing, lots of violence, and the occasional piece of women’s underwear (with the woman inside it). If you would take your kids to see any of the Bond films from the past 20 years, this film should be okay too. Of course, you should use your own discretion when it comes to your children.

* And if I might devolve into something a little less highbrow for a moment — there’s a scene in the film that shows off Olivia Wilde’s legs as she runs, and, to be honest, they are amazing. Very athletic-looking. Although I guess that, if you have to run everywhere because you’re living day-to-day, you stay in pretty good shape.