When Star Trek: Voyager first aired in Orlando, where I was living during most of its run, it was on the local UPN affiliate, which also was the flagship television station for the Orlando Magic. As a result, I missed a lot of episodes, especially starting in 1996 (season three). Now, thanks to Netflix, I’m catching up on them, watching one or two a night before I go to bed.

I’ve just gotten to Season Four, which is when Seven of Nine joins the crew. And, at the time of this writing, I’ve just watched “The Gift”, episode two of that season and Jennifer Lien’s final appearance as a series regular. (She played Kes, in case the name is unfamiliar.)

I remember seeing “The Gift” in 1997 and thinking, “wow, that was a pretty decent episode. Janeway stuck to her guns and saved this woman from life as a Borg, who had brainwashed her into thinking she belonged with them. I can totally draw parallels to other fiction I have read/seen/enjoyed.”

Yeah. Fourteen years later, not so much.

To recap, “The Gift” begins shortly after Voyager and the Borg work together to defeat Species 8472, who are so powerful and so alien that even the Borg cannot assimilate them. At the end of the previous episode, the Borg liaison, Seven of Nine, attempted to assimilate the ship and crew, but was stopped thanks to a little foresight on the part of Janeway and company. They disconnected her from the Borg and planned to rehabilitate her as a human.

The problem is this: Seven doesn’t want to be human. She wants to be a Borg. It’s all she’s ever known.

My 1997 self watched Janeway try to break through Seven’s shell and convince her that the Borg had damaged her, taken her away from her humanity and turned her into something she should never have been. I thought it was a noble effort, and at the end, during the “let’s show off the sexy new crewmember” scene, I figured that Janeway had broken through to Seven and convinced her she should be a human now.

And everyone goes home happy.

Janeway pretty much ignored that at every turn.

In Act One, when Seven is woken up to be told that her human immune systems are going to make her body reject her Borg implants, she tells Janeway she wants a subspace transceiver (probably something they can replicate quickly) and to be left on a habitable planet to await pickup by her people. Janeway, despite Seven’s loud and very clear protestations, says no.

Act Two is mostly about Kes’s growing telepathic abilities*, but is notable for Janeway saying that she believes Seven isn’t capable of making rational decisions for herself, so as ship’s captain Janeway is going to do it. Very alarming, and the expression on Janeway’s face echoes some of the expressions I’ve seen on television talking heads claiming that they want to remove choice to protect a group they don’t think can protect themselves. Case in point: the “opt-in to see adult websites” list coming soon to the U.K.. I was quite disturbed at this whole exchange, and the fact that the Doctor — a technological being himself, albeit one who Janeway continues to fight for the existence of — didn’t say anything. I could tell from his face that he wanted to, and Robert Picardo played the scene wonderfully.

In Act Three, Seven wakes up from surgery to find that she’s becoming more human, and that the Doctor has performed medical procedures to make sure this doesn’t kill her. She argues with Janeway, who again disregards Seven’s desire to remain a Borg and to return to her people, and then agrees to help Voyager remove some of the Borg technology she installed because… well… she’s stuck here.

But then she sees a subspace transceiver in a Jefferies Tube and makes an attempt to escape what, to her, is an untenable situation. She doesn’t try to destroy the ship; she doesn’t try to assimilate anyone. All she does is try to signal her people so they can rescue her from captivity — and how many episodes of Voyager did that happen in over the past three years? Kes’s new telepathic abilities assist the crew in stopping Seven, and the Borg is sent to the brig.

Act Four, however, is the worst of it. Seven is now in the brig, and Janeway tells her she’s met other Borg who were de-assimilated, and they all came to accept their new situation. She does make reference to the fact that Seven was assimilated while still a child, so she doesn’t have as many memories of being a human. Seven considers Janeway’s argument and, once again, says she would rather remain a Borg, that she doesn’t wish to become human, and that Janeway herself is removing from Seven the fundamental right of choosing her own destiny.

In Act Five, one really hopes that Janeway gets the idea. Seven — a Borg, a member of a species who isn’t supposed to show emotion, who is programmed not to show emotion — actually breaks down in tears and expresses her distaste at being forced to live as an individual, without the voices of the collective. Now, remember, only a few episodes ago Chakotay worked with some ex-Borg who formed their own collective and used it to serve the greater good — including saving his life. He knows what it feels like to be part of a group like that, and how beneficial it can be. But even he doesn’t stand up to Janeway and make her at least consider that she’s making a mistake. No, all that happens is we set up this series’s Picard/Data dynamic: Janeway tutoring Seven in humanity, the source of many, many heavy-handed episodes to come. 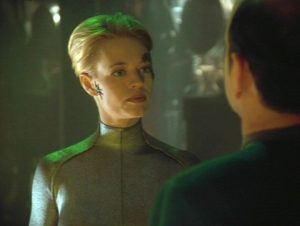 Finally, in Act Six, as I said earlier, we end up seeing that Seven has come to terms with being a human. So, in the end, Janeway’s actions — which today I see at the very least as being misguided and at worst reprehensible (I believe all people should have a choice, as long as they harm no one else in making that choice) — turn out to be “right”. I did feel like another scene, where Seven maybe decompresses with the Doctor while getting her new eye put in or something, would’ve been very helpful in bridging the gap from tearful Borg to stoic-and-somewhat-willing human. Oh well. Janeway gets away with it again, and we warp on home.

It’s amazing just how much 14 years can change a person’s impression of a piece of art. What was a noble gesture in 1997 is now something to be viewed with suspicion, and it’s going to color every interaction Janeway has with Seven over the rest of the series. I realize that, over time, Seven comes to accept her humanity, and I realize that the chord being struck was supposed to be “kidnapped child is raised by the ‘evil’ parents, comes to love them, and is returned to her ‘real’ parents but doesn’t want to go because she loves the ‘evil’ ones”. It’s just… Seven wasn’t a child when she was turned back into a human. She was in her twenties. She had the ability to make the choice for herself.

She chose Borg. Janeway took her choice away. Not an action worthy of Star Trek, I should think.

* I was also not very impressed with the way Kes suddenly jumped in power from “some telepathic stuff” to “uber-telepathic being”. That should’ve been handled more smoothly, and over a somewhat-longer arc. As with the Seven storyline, it felt like there was a big jump in the middle. And Jennifer Lien’s 80s hair did not help matters much — she was much more believable with the short hair than the feathered ‘do.