The concept of “based upon Book X by Author Y” is stretched pretty far these days. Sure, sometimes you get a Harry Potter or a Twilight, but other times you get a movie or TV show that is so loosely-based on the source material that, if the book was a person and the TV show was a pair of jeans, the combination of the two would violate the saggy-pants bans that are in effect in several states.

I mention this because I watch the TV show Haven. In the opening credits and most of the promotional material for season one, the producers hit “based on The Colorado Kid by Stephen King” pretty hard. When I first saw the promos, I figured, okay, this should be somewhat interesting. And it is; I happen to enjoy Haven, even if I’m still concerned they won’t be able to wrap up everything from this season in the upcoming finale*.

But it’s not based on The Colorado Kid. Not really. Because here’s what the two works have in common: 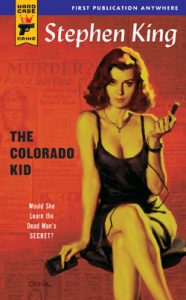 The Colorado Kid is mostly a story-within-a-story. The main character, Stephanie, is a journalism student working an internship in Moose-Lookit (a small island in Maine, at least an hour away from Bangor), at the local paper — a weekly run by Dave Bowie and Vince Teague. After a few months on the island — which is so small that it and so inaccessible that older students need to take the ferry to get to and from high school every day — Stephanie has been accepted by the town and by her bosses. In other words, she’s no longer an outsider.

One day toward the end of her internship, Stephanie, Vince, and Dave host a reporter from the Boston Globe who’s writing a series of features on unexplained mysteries of New England. After he’s gone, Stephanie learns that Moose-Lookit does indeed have an unexplained mystery, but it’s not the kind of thing Vince and Dave feel comfortable telling the Globe about.

Instead, they tell Stephanie the entire story, and that’s the main plot of The Colorado Kid: who was the man found dead on the beach, who killed him, and why? 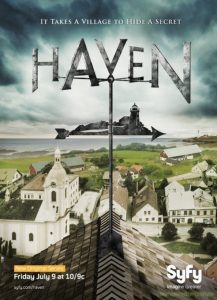 Throughout the whole book, I kept waiting for the King twist — what was the supernatural aspect going to be? What kind of monster would end up being the killer? And, because Haven was ostensibly based on the book, when was I going to read about “the troubles”?

Answers: it wasn’t a monster, and never.

Because The Colorado Kid is a straight-up mystery.

I’m not going to say I was disappointed with the story, because I really wasn’t (although the ending was a bit of a head-scratcher). I think the issue was more that I went into it expecting one thing and I got something totally different. I was primed for a supernatural story — I’ve read several of King’s other stories, novellas, and novels, and it’s pretty well-known that he writes mostly genre fiction — and the fact that Haven was based on the book (or so I’d been repeatedly told by the show’s promotional material) made me more-or-less ready for one.

In the end, I’ll say this: if you like Stephen King’s style of writing, you’ll probably like this book. If you like mysteries, you might like this book, although you’ll probably do some head-scratching, just like I did. But if you go into it expecting a sci-fi, fantasy, or horror story, or a story anything like the television show Haven, The Colorado Kid will probably disappoint you. It’s a pretty good story, but it’s not a genre story.

Note to Parents: The book contains some gross-out scenes, especially during the autopsy, but is otherwise acceptable for most teenage audiences. They’ll probably think it’s boring, but there’s nothing objectionable. Of course, you should use your own discretion when it comes to your children.

* I wrote this before the season finale. It did… pretty well, actually.