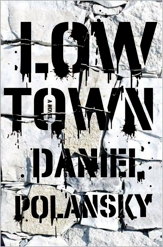 Low Town by Daniel Polansky wants to be an action-packed noir mystery novel set in a fantasy world. It succeeds at some of these things. While Low Town gets off to an awkward start with a summary of the grim and gritty world and our grim and gritty protagonist, it earned its first laugh on page ten — at the same time the first dead body turned up.

This is Daniel Polanksy’s first novel. He has a talent for writing fight scenes, and Low Town’s protagonist gives him plenty of opportunities to show off. The protagonist, Warden, likes to solve problems with his fists because he thinks he’s less likely to kill people that way. When he means to kill someone, he straps on his “trench blade” — the weapon he took from a fallen enemy during the Great War.

Warden was a soldier, and then Warden was a cop, but when we meet him he’s been stripped of his rank and makes his living as a mid-level drug dealer in Low Town — what they call the local slums. Unfortunately, he can’t bring himself to ignore the disappearance of a little girl, or her dead body when he finds it on the street. When a second child is abducted, he commits himself to finding the culprit and delivering him, if not to justice, then at least to his next incarnation.

The mystery aspect of Low Town is the book’s primary weakness. I had to watch Warden stand in a room with a metaphorical gun on the wall and then watch him spend the next three hundred pages ignoring that metaphorical gun. Near the end, the book winks halfheartedly at the audience as various characters tell Warden that he’s not a very good detective. An alert reader will already know that, because the alert reader will already know who killed the kids and have a decent guess as to why. If the reader is anything like me, they will spend most of the book shouting at Warden to figure it out already.

There are, by my count, approximately three female characters in the first half of Low Town. One of them is dead, one of them cooks breakfast, and one of them is a crazy lady. The lack of women is so exceptional that I began to wonder how the people of Low Town managed to breed. By the end of the book, the first three have been joined by whores of various classes, a few grieving mothers, and the Ice Bitch. The book doesn’t even have the excuse of being set in a medieval world, because it explicitly isn’t: There are references to large-scale shift work in factories and trench warfare, in addition to a tiered system of police departments.

Very little of the fantasy aspect of Low Town is laid out in clear prose. The reader must figure out the world through hints and suggestions (which will lead the reader to pick up on things that the protagonist misses; see above). The world hangs together well enough. The unexplained bits aren’t relevant to the narrative, and would slow down the action. It will be a disappointment to readers who enjoy a bit of expert world-building in their fantasy, but will help hold the interest of readers who are bored by exposition.

As in any good noir story, no one wins. If you like books where the hero comes out on top, avoid this one. Our protagonist isn’t a hero; Warden does some things that, in my opinion, take him from dark to actively hateful. The lack of a compelling protagonist combined with the failure of its twist ending made Low Town an unsatisfying read overall. Readers who are looking for grit and well-paced action might enjoy this book, but those who love mysteries should give it a pass.