The law-breaking but good-hearted character is one that most of us have come across in our consumption of media. From smuggler Han Solo to counter-terrorism agent Jack Bauer, we’ve time and again rooted for men and women who break the rules in pursuit of a greater good — often reluctantly.

And then there’s Darger and Surplus, who have absolutely no desire to be a force for good. They’re in Russia to make money via a complicated con involving seven beautiful women and an ambassadorship. This is the general plot of Dancing With Bears, the new novel by Michael Swanwick. 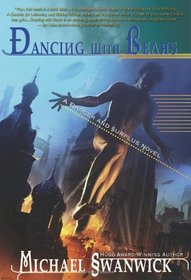 The principle characters of Dancing With Bears are Aubrey Darger, a debonair Englishman, and “Surplus” — that is, Sir Blackthorpe Ravenscairn de Plus Precieux — who is a dog. Well, a dog genetically engineered to have the intelligence and bearing of a man, but a dog just the same. Together, Darger and Surplus use their not-inconsiderable intelligence to try and make a buck, or a ruble, or whatever the local currency might be. These gentlemen are dropped into a futuristic Russia, but not a future you might expect. At first, when reading the novel, I thought we were in an alternate past, but as Swanwick takes us through the story, it becomes clear that the technological utopia came and went. There’s still touches of technology here and there, but on the whole the Russia through which Darger and Surplus travel is quite non-technical. Think New Crobuzon with less machinery.

Our story begins with Darger and Surplus in the service of a Byzantine prince and ambassador to Moscow, who is conveying the Pearls of Byzantium — seven physically-flawless women genetically engineered for maximum pleasure, but who can only touch their intended husband — to that great city. Early on they rescue a man from a cybernetic wolf and have a small layover at his home, during which the man’s son, Arkady, is exiled for attempting to profess his love to one of the Pearls. Later, when the group arrives in Moscow, Surplus is forced to take on the mantle of ambassadorship while Darger begins searching for their true prize: the lost library of Ivan the Great. These two missions bring our heroes in contact with a huge cast of characters and a broad series of machinations to bring about a revolution in Moscow.

What sets Darger and Surplus apart, I think, is their complete disinterest in anything that doesn’t directly benefit them. I mean, Han Solo came back to save Luke; Mal Reynolds never committed a crime that harmed the common people; and John Glasken, despite being a lout and a womanizer, played a large part in improving Australica for all its citizens. But Darger has no desire to give the library to the Russian people, and Surplus certainly isn’t being an ambassador for his health (although if, as has been said in the news, having sex keeps you healthy, Surplus certainly will live a long life). No, the two of them are running a very large con* with the goal of getting rich.

Darger and Surplus, though, aren’t the only interesting characters in Dancing With Bears. We also meet:

…as well as a collection of minor characters that includes genetically-engineered nine-foot-tall bears — presumably the ones with whom the dancing is done that the title alludes to.

Dancing With Bears introduces strong characters, a future world that will appeal even to the steampunk and urban-fantasy crowds, and enough plot twists to close a grocery store’s worth of bread inventory*. While I found the immense amount of intrigue a little too tangled for my liking, I was able to set that aside because the book was so rich in character- and world-building, two things which I personally really enjoy. The pacing is a bit slow at first, and there are a couple of “as you know, Bob” moments, but once the characters arrived in Moscow I found myself quite interested in what would happen next.

My only previous exposure to the author, Michael Swanwick, was in his novel The Iron Dragon’s Daughter. I definitely liked Dancing With Bears more than Daughter, perhaps because — at least, in my opinion — the ending was more satisfying and there were more characters to root for.

You’ll be rooting for Darger and Surplus as you read this book. Check it out.

Note to parents: This novel contains explicit material, including sex, violence, and language, as well as scenes of torture and drug use. I personally would not recommend this for anyone under the age of 15 — and even then, only to mature teens — although you should of course make your own judgment regarding your children.

* In addition to the novel itself, you may also be interested in a series of flash fiction running on the Starship Sofa podcast, “How to Run a Con”. In it, Michael Swanwick is joined by Gregory Frost to portray Darger and Surplus as they explain to the average listener the ins and outs of being con men. It begins in Episode 176.

** Did I stretch that metaphor so far? Sorry about that. But it sounded good in my head.