I’m a fan of Howard Philips Lovecraft. In fact, he’s my favourite (deceased) author. Perhaps unusually for someone of my age, I didn’t actually come to him through the Call of Cthulhu RPG, which seems to have been the main route of discovery for most people. In fact, I was introduced to Lovecraft and the Cthulhu mythos through Doctor Who, specifically the Virgin New Adventures.

A couple of years after Doctor Who was originally cancelled in 1989, the Virgin publishing group acquired the rights to publish original, novel-length Doctor Who fiction. With no television revival on the cards, this was a godsend for fans. The New Adventures initially promised stories “too broad and too deep for the small screen”, and to start with this mainly meant a slightly disconcerting touch of nudity, sex and violence. But after a while the range settled down and produced some of the best Doctor Who stories in any form. It’s hard to believe the first volume, Timewyrm: Genesis came out twenty years ago this June. It’s even harder to believe that Paul Cornell’s first ever published novel, Timewyrm: Revelation came out twenty years ago this December. Paul wrote another five New Adventures novels, one of which – Human Nature – he adapted into one of most well-regarded episodes of the current TV series in 2007. 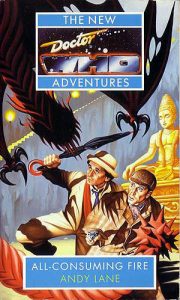 One of my favourite New Adventure novels was All-Consuming Fire by Andy Lane. This novel is quite remarkable – not only is it a Sherlock Holmes crossover, but it’s also a story in the Cthulhu mythos. But more than just having the Doctor joining forces with Holmes and Watson to battle the Old Ones (and, let’s be honest here, doesn’t that sound like the most outrageously awesome story idea ever?), it went further by implying that a variety of creatures from the original television series – mostly the weird, nebulous sort like the Great Intelligence and the Animus – were actually part of Lovecraft’s pantheon, applying names familiar to Lovecraft fans to these TV monsters. All-Consuming Fire was just the start – from then onwards, various writers wove Doctor Who and Lovecraft together, further embedding the original TV series in the mythos. For such an extensive contribution to the Cthulhu Mythos, it’s amazing it is almost entirely overlooked by Lovecraft fans.

From there I was hooked on Lovecraft. This was 1994, before the internet, before Amazon, when things went by snail mail and everything was slow. Acquiring Lovecraft stories or books was difficult. They were out of print, or at least unavailable in New Zealand. I found a couple of ancient paperback anthologies in a used book store, but one was mostly material attributed to Lovecraft but really mostly written by others, including August Derleth, while the other was a strange collection of his, shall we say, crappy stories like The Cats of Ulthar and The Dream-Quest of Unknown Kadath.

It’s all different now, of course. Lovecraft died in 1937 so all of his writings are in the public domain. I have a set of Arkham House hardcover anthologies, but you can download everything he wrote for free. Fifteen years on from when I was first introduced to Cthulhu, Nyarlathotep and Yog-Sothoth, not only have I read everything he wrote several times over, but his name is spreading as a master of 20th century American horror.

Which is where the Escape Pod Lovecraft readalong comes in. All of Lovecraft’s material is available online, and most of it is pretty short. So, running in publication order (not chronological order of writing), I’ll be reviewing and commenting on his stories. All of them, the good and the bad, the short and the long. The excellent HP Lovecraft Literary Podcast have been running through Lovecraft’s canon for a while now – and they really are worth checking out – but I’ll be giving my take on the stories here.

The first story up is The Alchemist, first published in The United Amateur in November 1916. It was also one of the first stories Lovecraft wrote, in 1908, and will be a fascinating place to start. Grab your copy and get reading!