The new patient was five or six years old, male, Caucasian, John Doe as usual.  Grace checked the vitals his bed sensors were feeding her board and concluded he was asleep.  She eased the door of 408 open and stepped in.

The boy’s head was tilted on his pillow, brown curls cluttering his forehead.  Sleep had flushed his cheeks so he looked younger than the estimate.  He seemed healthy, with no visible deformities, and if he had been opted for looks, it had worked—Grace would have described him as ‘cherubic’.  He wouldn’t have been dumped if nothing was wrong, so Grace found herself stepping softly, unwilling to disturb him and discover psychological conditions.

“Don’t worry about waking him, he sleeps pretty deep.”

Grace started and turned to the other bed.  “Hi, Minnie.”

The girl grimaced.  “I go by my full name now, Dr. Steller.”  Grace brought up her board to refresh her memory, but the girl said, “Minerva.  Had you forgotten they’re doubling up rooms?”

“Is the rise in numbers caused by a rise in opting?  Or is it a rise in surrenders, or arrests of parents?”

“Lord, Minn—Minerva, I don’t know.  Planning to be a reporter when you grow up?”

“No, a scientist,” Minerva said and smiled, pleased to be asked.

“Why the scalpel-edged questions then?”

“Just curious if my campaign had had any effect,” Minerva said, nodding toward the window.  The billboard across from the Gene-Engineered Pediatric Inpatient Center flashed a smog warning, then a PSA about eye strain from computer visors, but Grace remembered when it had borne a static image:  Minnie, one year old, a pink sundress exposing the stubs of her arms and legs.  _Babies should be born, not made._  The ad had stayed up until Minnie was eight, three years after her parents turned her over to GEPIC, and apparently she had seen it.  She was twelve now, with serious eyes and a loose ponytail, dark blonde. 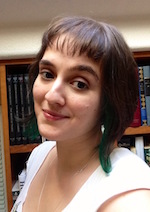 Felicity Shoulders was born in Portland, Oregon and raised on a steady diet of books, rich in speculative fiction. Until age 20 she planned to be a paleontologist, but then she devoted herself to writing. She still loves dinosaurs and geology and still lives in Portland. Her other interests include folk tales, history, and various (mostly geeky) sorts of pop culture. She blogs about all of this at Faerye.net.

Felicity writes science fiction and mythic fantasy, as well as naturalistic stories and other prose. She received a Master of Fine Arts in Writing from Pacific University in 2008. Her first published fiction appeared in Asimov’s in 2008, and her stories continue to be published there regularly. Her fiction has also appeared in The Magazine of Fantasy and Science Fiction, CALYX Journal, and elsewhere. “Conditional Love,” originally published in Asimov’s, was a nominee for the 2010 Nebula Award for Short Story.