Anyone who’s ever been a fan of a losing sports team knows that sometimes you have to make excuses for your club’s poor play. As a lifelong Dolphins fan, believe me, I know — I’ve spent more than a decade extolling our defense while facepalming at the antics of our atrocious offense.

As a sci-fi fan, I’ve lately found myself feeling the same way. 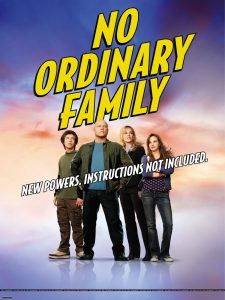 No one was more excited than me when No Ordinary Family was announced. I’ve often thought The Incredibles was robbed of a best picture nomination, but if the compensation is a live-action version, well… who am I to complain?

There’s just one problem: I don’t actually like No Ordinary Family.

On paper, the show is a great concept for someone like me: normal family gets superpowers, does superheroic things. And the cast is pretty good: Michael Chiklis as Mr Incredible, Julie Benz as the super-speedy mom, Stephen Collins playing against type as an evil research magnate, and Romany Malco (who always stole the show in Weeds) as the sidekick. The scripts are your tried and true origin story plots — family vs superheroism, vigilantism vs the need to do right, and the ever-popular “getting discovered” story arc. On paper, it’s a recipe for success.

Except that the execution keeps falling flat. The family drama is too dramatic or too silly. Most of the subplots with the kids make me want to facepalm (despite the excellent job Kay Panabaker does as the telepathic teen daughter). The geek references from Katie, one of the sidekicks, are wasted on the audience because it’s abundantly clear she’s a geek only to pacify the geek crowd who — and let’s be honest here — isn’t getting what they need from this show.

We wanted a live-action Incredibles. What we got was a family drama with a veneer of superheroic fantasy. And as bad as it would be for genre as a whole to lose No Ordinary Family, I can’t see any way that the show can turn itself around without killing off a few of the characters in a David Mack style (remember what he did to the crew of the Da Vinci, and the billions he sacrificed to the Borg).

The thing is, instead of geeks saying we should cut our losses and support other genre shows like Fringe, we try to have our jumja sticks and eat them too. We make apologies for the less-intelligent plots, the overused origin stories, the constant hammering into our heads that MISUSING POWERS FOR PERSONAL GAIN IS WRONG. The core audience already knows all this stuff. They want more Chuck and less Brothers & Sisters.

Now I’m not completely dim — I’ve worked in television for six years, and I understand the concept of making a show appeal to the widest audience possible. Unfortunately, homeopathy doesn’t work. Putting 1/100th of 1% of genre into a 100% solution of ABC family drama won’t cure the lack of geek audience.

I’m tired of making excuses for shows like No Ordinary Family. I’m tired of keeping passable excuses for genre on the air at the expense of truly good shows like Fringe. I don’t wish anyone working on the show any ill will, and if it stays on the air for five years, I’m totally fine with that. But I can’t keep ignoring the flaws of genre shows like No Ordinary Family. I say it cheapens the content pool as a whole, and — let’s be honest here — if they wanted a TV version of The Incredibles… well, doesn’t Disney own it already?

I’m leaving No Ordinary Family on the DVR, and I’ll probably finish out the season. But I can’t lie to myself anymore.