For as long as my daughter has been alive, I’ve pledged not to be one of those parents — you know, the ones who bring kids to inappropriate films*, or bring kids with inappropriate behavior to films.

Well, we managed for four years. But when my daughter’s best friend’s mom suggested we all get together and see “Tangled”, I couldn’t very well say no. And off we went. 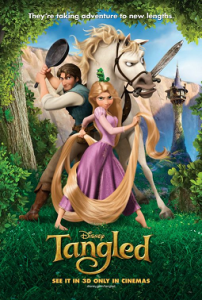 “Tangled” is your standard modern-day-Disney riff on the old “Rapunzel” story. In this version, however, Rapunzel’s parents are the king and queen, and they didn’t need an enchantress to help conceive her. Instead, the enchantress has been hiding a magical flower which bestows eternal youth and health. But when the queen falls ill late in her pregnancy, her soldiers find the flower and she drinks a potion made of it. Her illness is cured, and when Rapunzel is born, the baby’s magical hair can cure anyone who knows the secret song. At first the enchantress just wants to steal a lock of Rapunzel’s hair, but when she finds out it only works if the magic is freely given, she steals the baby.

Fast-forward 18 or so years, to Rapunzel’s 18th birthday. She’s been locked in a tower all this time, thinking the enchantress (Mother Gothel) is her real mother. But the tower isn’t a terrible place; other than no human contact with anyone other than Mother Gothel, Rapunzel is free to read, dance, paint, sing, cook, play music, or do anything else that suits her. However, for her birthday all she wants is to see the floating lights — a huge flock of floating lanterns released on the birthday of the lost princess. Mother Gothel says no, and Rapunzel resigns herself to her fate.

And then Flynn Rider, a thief, shows up. He, along with some henchmen, stole the lost princess’s crown, but when the palace guards get too close, he escapes and stumbles upon the tower. Rapunzel promptly hits him with a cast-iron frying pan, makes a deal with him — “you guide me to see the lights, and I’ll give you back your satchel, which you seem so very intent on retrieving” — and off they go on a madcap adventure full of singing, amusing animals, derring-do, and, because it’s Disney, love between the rascally-yet-kindhearted male character and the naive-yet-courageous princess just on the cusp of legal adulthood.

The animation in “Tangled” definitely lives up to the Disney name — the lighting, color, art, and movement are gorgeously-done. However, I was less than impressed with some of the voice synching — there were areas I definitely noted that didn’t look quite right. The music was also very good, for what it was — audio wallpaper, except for the singing parts — but it isn’t a soundtrack I want to buy instantly (compared to, let’s say, “Stardust”, where I actually paused the DVD to go on iTunes and buy the soundtrack right away). The songs didn’t blow me away either, except for the first two numbers — Rapunzel’s song about her day, and Mother Gothel’s “Mother Knows Best”. I feel kind of bad saying that because I’m actually related to the lyricist (he’s my cousin) and if you don’t go see the movie or buy the soundtrack that probably has some impact on how much he gets paid, but I’m not going to lie to you. The duet between Rapunzel and Flynn wasn’t all that inspired, and the song about the henchmen and their dreams wasn’t all that different from any other song like it in any other princess-centered animated film. Fortunately, there aren’t that many songs in the film.

The cast for the film was rather small — in fact, the king and queen don’t have any lines at all. Mandy Moore plays Rapunzel, and she’s quite good. Zachary Levi (Chuck from “Chuck”) is Flynn, and you can just hear him playing half the lines as Charles Carmichael***. Donna Murphy (Picard’s love interest in “Star Trek: Insurrection”) is Mother Gothel, and she’s clearly having a good time doing the role. Ron Perlman, Jeffrey Tambor, and Brad Garrett also appear. The best acting, however, comes from the obligatory Disney animal characters. First is Pascal, Rapunzel’s pet chameleon, who conveys a wide range of emotion with only his eyes and tail, and gets to stick his tongue into… well, you’ll just have to see it. And second is Maximus, the horse of the captain of the guard. He really steals the show. “Played” as more of a large dog than a horse, he has some of the best moments in the film. I mean, it is a Disney film; one thing they know how to do is animal characters. His duel with Flynn is one of the most hilarious things I’ve seen this year.

One thing I do want to talk about before I close is death. This film contains three direct references to death — two characters actually die, and you also see a hangman’s noose as one character is led off to be executed. I saw this film with a four-and-a-half-year-old and a three-year-and-eleven-month-old. The latter child I think handled it better because she’s seen a lot of Disney films, but my daughter hasn’t really been exposed to death beyond the passing of one of our cats a year or so ago. It was hard to explain to her what the hangman’s noose was and why the character was so afraid to see it, and it was even harder to make sure she understood why the other two characters died. One of their deaths was the classic Disney “cursed by their own hubris”, but the other was… well, I’m not going to mince words: someone got stabbed. The film is rated PG for “brief mild violence”, so I guess someone being stabbed to death qualifies as mild these days, but I really didn’t expect it. My daughter wasn’t traumatized or anything, and the story does have a happy ending (it is a Disney animated film), but it’s something to think about if you’re bringing a young child.

Also, make sure your child understands the concept of being kidnapped as a baby and raised by an evil enchantress who only seems like a nice person, or else you’ll be answering questions throughout the entire film. As I said before, Mother Gothel isn’t really evil… at least, not until Rapunzel defies her and leaves the tower.

And finally, not that it really matters, but there’s a huge plot hole in the film: what exactly is Mother Gothel doing with her eternal youth and good health? Just… living forever? Seems kind of silly to me. What’s the point of having those things if you don’t use them? It’s never addressed, and as an adult, it bothers me. Kids won’t mind, though.

Overall I enjoyed the film, although I’m kind of miffed that I paid $26.50 for it (two adults at $9.50 and one child at $7.50). I give it 2.5 stars if you’re an adult, and 3.5 if you’re a kid — this is the kind of stuff kids love these days, apparently, and I can’t imagine any kids going and not enjoying themselves. Still, it’s PG for a reason, so make sure your child understands the Disney interpretations of kidnapping and death before plunking them down. It’s 100 minutes long, too, which makes me happy — I hate paying theaters for anything under 90.

* When I saw 28 Days Later, there was a woman there with a child who couldn’t have been more than six. And as you know if you’ve seen it, the film is full of violent images and, in the very first scene, Cillian Murphy’s penis**.

*** Does he still do that character? I haven’t watched Chuck since the end of Season 2.