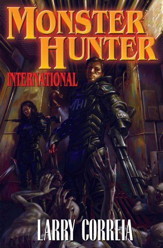 I had a warm spot in my heart for Larry Correia after reading his HK rant. (“Because you suck. And we hate you.”) Unfortunately, I decided to read his novel, Monster Hunter International. This book was originally self-published, and owes its success to Mr. Correia’s marketing instincts. I don’t have space to cover all the flaws in this book, so I’ll just hit the highlights. Because it was self-published and only later picked up by Baen, Monster Hunter International shows no sign of an editor’s pen. The characters are flat. The prose is stale and repetitive. The plot reads like something intended for a weekend of tabletop gaming, complete with prophetic visions from the storyteller to keep the protagonists on track.

The company called Monster Hunter International was founded when a group of good Southern boys got a lynch mob together in order to drive some unsavory elements (read: vampires) out of their town. I wish I was kidding. In the years since, Monster Hunter has made its founder’s family rich by collecting government-sponsored bounties on supernatural creatures like werewolves, zombies, and vampires. These days, the only thing they fear is the EPA (and Fish and Wildlife, and OSHA, and…).

Our hero, Owen Pitt (brother of the heavy metal artist Mosh Pitt — not kidding about that one, either), gets involved in the monster hunting business when he defeats his evil-boss-turned-werewolf in single combat. Afterwards, he is visited at his home by Monster Hunter International’s recruitment team, including one Julie Shackleford, who tells him that not only is he the first man in history to kill a werewolf with his bare hands, but that his scores in various firearm competitions are even better than hers! Also, his college degree proves that he is a genius. Owen decides that he is in love (though whether with her or her handguns is sometimes an open question). He expresses his love by staring at her a lot, and when that doesn’t work, by pretending to be her friend.

I decided to read this book based on the strength of its action scenes, but to my dismay I found that the narrative is dominated by lectures. The hundred pages or so that pass between the werewolf fight and the first vampire fight are filled with Owen’s monster hunter training. We are introduced to some more monster hunters, whom the reader might be tempted to worry about if Mr. Correia had the fortitude to kill his characters. In training, Owen proves that he is the best at every possible thing (except running), earning the admiration of all the instructors. Multi-page monologues leave the reader with only one questions: Who will be beating our hero with the exposition bat this time?

When the book finally gets back to the action, it’s a mess of vampires on a cargo ship. Owen saves everyone from the cowardly French vampire, and is left for dead by Julie’s asshole boyfriend (and who didn’t see that one coming?). We learn the first rule of monster hunting: Any problem can be solved by getting a bigger gun. In Owen’s case, it’s a fully automatic cut-down combat shotgun with a spring-loaded bayonet and optional grenade launcher. (“How many gun laws does this break?” “All of them.”) The action scenes are precise and well-scripted, but I was willing to put this book down at any time up to the last fifty pages. The final battle is the most interesting one in the book, but suffers from overuse of the passive voice (see: the perils of self-publishing). Finally, it turns out that women are the source of all evil.

Owen is not the kind of character who thinks his way out of problems. Despite being introduced as a genius, he isn’t particularly bright. He has a magical dead Jew in his head who does his thinking for him (still not kidding). Instead of figuring out the bad guy’s plans, the magical Jew dumps Owen directly into the bad guy’s head and lets him see through his eyes, removing all suspense from their later encounters. People who learn things tend to go insane, like Julie’s father.

Monster Hunter International did not have to be seven hundred pages long. Its sequel, which I am told did benefit from the attentions of an editor, is much shorter. Not that it really matters, since I’m not going to spend any more time struggling through yet another lecture set to the sound of an entire Viking army’s worth of political axes grinding. Monster Hunter International is not a book for people who enjoy well-crafted prose or fast-paced action. It is not for people who don’t care about the difference between a Government .45 and a Glock. Larry Correia is writing for a specific audience, and it is clear that I am not one of them.