So, you like The Walking Dead, huh? It’s neat, right? An ongoing post-apocalyptic TV series about zombies, based on an award-winning comic. What’s not to love? And fortunately, they’ve done a mighty fine job on the adaptation. This viewer is pleased. Zombies are popular at the moment, cresting at the top of one of those unpredictable waves of fashion. The Walking Dead has come at exactly the right time, whether by design or accident, and all power to it.

But this series fits into another genre, that of the post-apocalyptic. And this is where I have a confession to make.

This is, of course, not true. Post-apocalyptic is also hugely popular and always has been, not just with the general public but with discerning genre fans like you and I. It seems that wiping out humanity in some global catastrophe is something that, maybe, we all secretly wish for. I mean, if we were among the lucky survivors, it’d be free reign, right? No work, no more need for money. No more cruelty and tyranny, no more pollution, overpopulation or war.

And of course no people, no family, no friends, no loved ones, and the beginning of a huge struggle for survival against impossible odds in a situation likely to psychologically traumatise even the most hardened survivalist.

So okay, not so neat.

I said I don’t like post-apocalyptic, and that bit is true. Post-apocalyptic is formulaic, simply because the scale of the situation is such that any fiction set after the disaster must follow similar plot lines. The survivors are isolated, and then eventually find each other. Cities are empty or full of the dead (or the walking dead). There is no power, no medicine. Every manmade resource is suddenly very finite indeed. And so on, and so on. Plotwise, most post-apocalyptic stories are more or less the same.

I should point out here that I’m no expert. I have friends who are very dedicated followers of end-of-the-world stories, and no doubt about now they’re ready to put their keyboards through the computer screen in frustration. But hear me out. Post-apocalyptic may suck, plotwise, but where it really shines is in characterisation. Possibly more than any other genre, post-apocalyptic depends upon strong characterisation. Because if all the plots are the same, or similar (and I’m talking pure plot here, which is different to story and situation), then all you have left are the survivors. And it is how the survivors act in their new environment that makes the story. I’m not saying that characterisation is unique to the post-apocalypse, far from it, but I am saying that if you’re about to write an epic tale of an empty world, you’ve got to be prepared to engage the reader with some very, very powerful players.

With that in mind, and as a self-confessed post-apocalyptic skeptic, here’s my list of five tales that, to me, are among the best examples of the post-apocalyptic. I’m not just going to regurgitate a list from Wikipedia (and, my heavens, there is quite a list on there), these are personal choices that I think are either great examples of either characterisation or perhaps an unusual or uncommon take on the post-apocalyptic plot. Having just slated the genre for being formulaic, let’s see if there are any stories which break the mould.

Before I continue, there’s also an important distinction to make here between those stories which are genuinely post-apocalyptic, and those which are really apocalyptic. Post-apocalypse, by definition, implies that the menace, threat, disaster, alien invasion, plague, etc, have been and gone. What we are left with is the world and the people left afterwards. Stories like the recent film Skyline, or 2012, or great classics like The War of the Worlds take place while the disaster is unfolding. While the aftermath may be considered post-apocalyptic (although probably not in the case of The War of the Worlds), we don’t see that bit. I’ll admit here I’m going to cheat on one entry in my list below, but only because I think it’s a particularly fine and relatively unknown example. 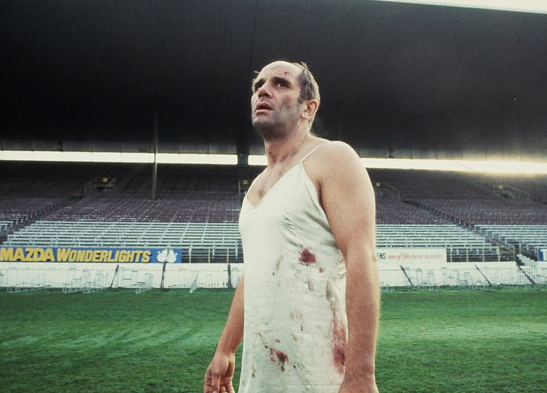 I’m really sure how well known New Zealand cinema of the early 80s is outside of that country, but The Quiet Earth is well worth tracking down. It tells the story of a man who wakes up one morning to find the world empty − whatever the apocalypse was (I shall reveal nothing), it actually physically removed the world’s population, so our hero (played by the wonderful Bruno Lawrence) finds himself genuinely alone. With a completely deserted Earth, not even a single corpse in sight, Lawrence carries the majority of the film on his own. It’s a remarkable performance as his character goes from confusion, to exhilaration (with nobody around the world is his oyster… if he wants to drive a giant earthmover through a gas station to see what happens, why not?) and finally to total paranoia and delusion. And after all, if you were the only human being left on the planet, wouldn’t you start to think you were special? The Quiet Earth is out on DVD and I’d recommend you grab it. 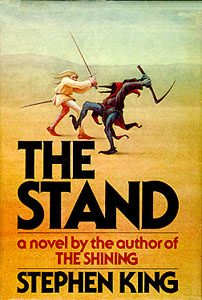 The grand-daddy of all post-apocalyptic stories, Stephen King’s 1978 tale of the survivors of a super flu which wipes out most of the human population is rightly considered a classic. At an eye-watering 1300 pages, this book is a perfect example of character over plot. Of course, King is known for this, but while the concept of a superflu (one engineered by the military as a biological weapon that is released accidentally) was old hat when King wrote it, the journey of the survivors as they find each other and come to terms with their new world is brilliant. Although the central plot eventually reveals itself − that of the survivor’s journey to Las Vegas to make their stand against an evil that has arisen − how the characters react and cope is what makes this whopping tome a real page-turner. If you haven’t read any King, this wouldn’t be a bad place to start. Afficiandos think that this is his best work; while I personally prefer ‘Salem’s Lot, if you have any doubts about the post-apocalyptic genre, this will set your mind at rest, as it did mine. 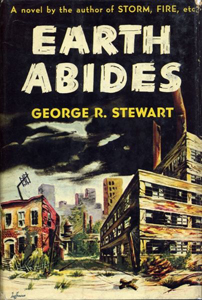 Twenty-nine years before The Stand was published, academic George R. Stewart wrote his single novel which might be called “genre”. Earth Abides is another that follows the standard post-apocalyptic formula − a super-sickness kills everyone, leaving only those immune to the disease alive − but you can forgive Stewart for this given that it was probably a newer story concept back in the 1940s. Earth Abides might be that one book that I’d take to a desert island, should I be so abandoned. It’s beautiful, moving and sad, and sticks in the mind not just because of the human characters and their journey but because of Stewart’s depiction of the world itself. In Earth Abides, the Earth itself is a character. Rid of destructive humans, it begins to regenerate, reclaiming itself and returning to an earlier pre-industrial (you might even say ‘default’) state. Stewart conveys this in a striking way, with a key motif being the silence of the world. Without humans and their cars, planes, factories and technology, the Earth is mostly silent, the loudest sound being that of a thunderclap. In this quiet Earth, the survivors gather and attempt to reconstruct society but ultimately they fail, instead regressing to a more primitive level of society. This only reinforces the central theme of the book. The Earth abides; humanity does not. 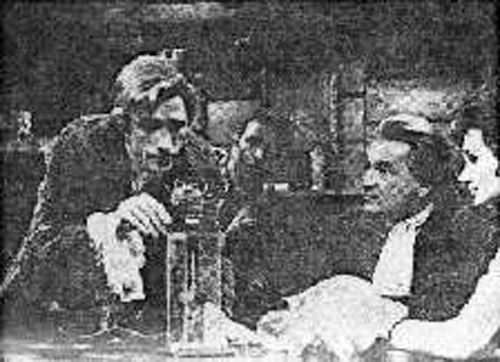 I’m cheating here. I’m not talking about Cormac McCarthy’s Pulitzer Prize-winning post-apocalyptic novel, one which dominated the responses on Twitter when I put out a call for recommendations. I’m talking about Quatermass creator and master of British science fiction Nigel Kneale‘s one-off BBC television drama from 1963, now sadly lost from the archives and only surviving in script form plus, it seems, one manky photo. Also, it’s not really post-apocalyptic. In fact, it is really pre-apocalyptic. In the 18th century, the inhabitants of an English village shun the road that runs through the nearby woods, for the woods are haunted and people have heard terrible things. As the story reaches the climax, it is revealed that the manifestations on the road are the echo of people fleeing an atomic explosion in the present day, somehow riverberating back in time. The juxtaposition of modern − police sirens, recognisably modern people running in abject terror for their lives − with the old, with the 18th century characters cowering in terror, completely unable to comprehend the sound which we, the viewer, recognise all too well, must have been both brilliant and chilling when it was first shown. 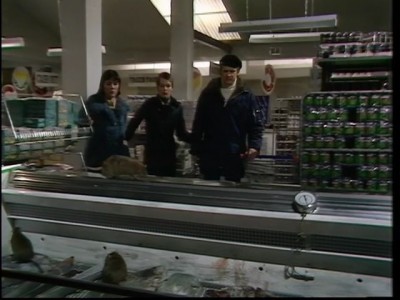 I can’t make this list, self-confessed archive television nut that I am, without mentioning Terry Nation’s BBC TV series, Survivors. Again, the scenario is pure post-apocalypse cliche. Humanity is mostly wiped out by a plague, strongly implied to be deliberately engineered and released by accident. Over three seasons between 1975 and 1979, Survivors charted the journey of the survivors as they found each other and ultimately formed a community. Critics often bemoan the transformation from gritty science fiction survival story to “soap opera”, but I think they’re confusing soap opera with character-driven drama, and this is where Survivors shows its real strength (characterisation, see?). Survivors was remade for a modern audience over two seasons in 2008 and 2010, but here the tired nature of the premise was in full effect, rendering the remake flat and pointless. Survivors should be experienced in all its 70s glory.

The Dalek Invasion of Earth 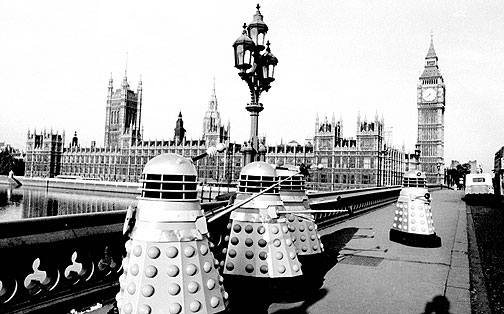 A sixth entry, mainly because Nigel Kneale’s The Road doesn’t quite count. The Dalek Invasion of Earth was the second appearance of the Daleks in Doctor Who, and was broadcast in six episodes from November 21 to December 26, 1964. Despite the title, this isn’t about an alien invasion. By the time the Doctor and company arrive in a deserted, dilapidated London, the Daleks have been the masters of the Earth for a decade or more. Here we discover that the Daleks first employed a virus to weaken society before arriving in force, and years late the surviving humans are either enslaved or gathered in disparate resistance groups.

The Dalek Invasion of Earth is Doctor Who‘s first foray into alien invasion and one of the rare occasions it featured a genuinely post-apocalyptic story. Extensive location work around London makes this story something of a small-screen epic, and to this day it is regarded as one of the best stories of the show’s early years.

There are many more that are worth of this list − as already mentioned, The Road by Cormac McCarthy, but also Wall-E, Boneshaker by Cherie Priest (perhaps a rare example of post-apocalyptic confined to a very specific place, namely the walled city of Seattle). UK genre publisher Abaddon has a entire ongoing post-apocalyptic series, The Afterblight Chronicles, which are well worth checking out. Like I said I’m not post-apocalyptic scholar so please, nominate your own prime examples of the genre in the comments and teach me a lesson.

Now, if you’ll excuse me, I have the next episode of The Walking Dead to watch.