“I know I can’t do anything about this–” she gestured toward the tangled blankets, the hospital bed, the pale walls. “But I’ve asked the doctors to take some cells–I still have a few healthy ones left, you know, and they’ll keep for some time–“

I could guess the rest. But Susan, ever the biologist, had her lecture after all. “It doesn’t work like that.” Her voice was gentle, as if she were speaking to one of her two sons, not to Mom. “A clone isn’t the same as the original. Your clone would be no more like you than–than one identical twin is like another. It wouldn’t be–” Susan’s voice caught. “It wouldn’t be you.”

“You don’t know,” Mom said. “None of the clones are old enough to ask yet. They’re just babies.” 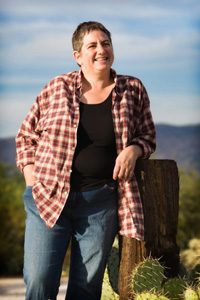 Janni Lee Simner was born aboard a pirate ship, but as soon as she came of age booked passage with a caravan bound for the Sahara, and spent the next decade as a seeker of lost cities, hidden tombs, and ancient artifacts. While hiding from assassins in the lost Library of Alexandria, however, she discovered she really preferred telling stories, and so she settled down in the Sonoran desert to write, interrupted only by the occasional map-bearing stranger or man-eating Gila monster.

Mur is the 2013 winner of the Astounding Award for Best New Writer (formerly the John W. Campbell Award).