Next week… we discover that food is, in fact, love.

Thargus thought the time right. He set the lights to full strength and flailed and gnashed and roared as he’d been practising. He felt rather silly, but the performance seemed to be working. The human, one hand steadying its spin, looked on intensely. It moved the white stick up to its mouth, breathed in, and then stabbed the stick out against the sac wall.

“Don’t be afraid,” Thargus said, meaning the opposite. He’d seen the trick on old films stored in the moss-brain when humans always said one thing and meant another like “We’re safer if we split up.”

The human exhaled a long stream of smoke. “I’m not,” it said.

That didn’t sound right. Thargus considered his response while staring at the human. It sure was ugly. A patchwork of dirty synthetics over the majority of its body, and on top of its pudgy, pink head, strand upon strand of greasy hair. Ugh! Thargus felt sick.

Thargus didn’t feel comfortable telling an outright lie, but that didn’t mean he needed to be too honest. “I might.” 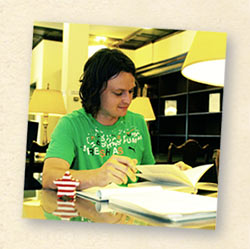 Stephen Gaskell is a freelance videogame script consultant and speculative fiction writer whose work has been published in many venues including Nature, Interzone, and Clarkesworld. An alumnus of University College, Oxford, he is also a graduate of Clarion East, and a member of the Villa Diodati Writers Group.

Chris Miller is a podcaster and self-proclaimed “codeshaman” who crafts a blog & podcast called Unquiet Desperation. Miller’s interests are far-flung, as is his writing: he may blog about Cleveland weather one day, and coding the next.