You could feel their heat. Not a metaphor, I don’t mean that, I mean literally the room grew warmer when they were in it. They were both so powerful. Whenever Anne and Jack (they weren’t named that then, but that’s who they were) strolled into the room you got contact highs from their lust. People who would never make out would find excuses to go to the bathroom together and come back with monster hickies. Everyone always wanted to sit near them because of their heat, and because they always said the thing you wish you’d said but only thought to say a billion blinks later.

When I first joined the Freebooter tech collective Anne and Jack were happy to have another girl in the group, but otherwise they ignored me. I could stare and stare at them all day long, hiding behind my black-rimmed glasses. But then one day Anne looked at me, and then Jack looked too, and we all just sort of fell toward each other. Like gravity. Like magic. Like there was a God. 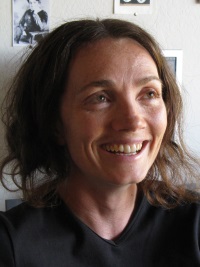 Katherine Sparrow is the author of the on-going urban fantasy series, “The Fay Morgan Chronicles” as well as dozens of short stories that have been published widely. She’s been nominated for a Nebula Award and attended the Clarion West Writers Workshop, and writes young adult novels.

Nate Periat is a person who exists.

Kate Baker is the Podcast Director and Non-fiction Editor for Clarkesworld Magazine. She has been very privileged to narrate over 400 short stories/poems by some of the biggest names in Science Fiction and Fantasy.

Kate is also currently lending her voice to The Dark Magazine podcast and has also read for various other audio venues such as Cast of Wonders, Beneath Ceaseless Skies, Podcastle, StarShipSofa, Escape Pod, Nightmare Magazine, Mash Stories, and The Drabblecast.

She has completed a few audiobooks too, all of which can be found on her narrations page.

Kate is also a professional SFF genre writer. You can find her short stories at various venues. Check out the writing tab for links.

Kate is currently situated in Northern Connecticut with her first fans; her wonderful children. She is currently working as the Executive Director for the Science Fiction and Fantasy Writers of America (SFWA).