Summer in Paris, Light from the Sky

Adolf Hitler came to Paris in June 1941 feeling the weight of his years in his legs and the taste of a dying dream in his mouth. He spent most of that first day walking up and down the Champs Elysées, working the stiffness out of his bones and muscles while he looked at the shops and the people. Some of the dull ache was from the wooden benches on the train from Hamburg; most of it was age. And beneath the discomfort of his body, his soul ached too.

He’d never been here before, he thought as the Parisians slipped past in the noon-time sun. He snorted at the revelation. A fine painter you are, he told himself. 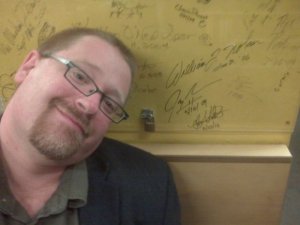 Ken Scholes is the award-winning, critically-acclaimed author of five novels and over fifty short stories. His work has appeared in print for nearly twenty years. His series, The Psalms of Isaak, is published by Tor Books and his short fiction has been collected in three volumes published by Fairwood Press.

Ken is a winner of the Writers of the Future Award, France’s Prix Imaginales, the Endeavour Award and a scattering of others. His work is published internationally in eight languages. Ken’s also a public advocate for people living with C-PTSD and speaks openly about his experiences with it. Ken is also a performing musician, presenter and consultant. Ken also occasionally coaches individuals, organizations and businesses on accessing their inherent creativity, resilience, insight and capacity.

Ken’s eclectic background includes time spent as a label gun repairman, a sailor who never sailed, a soldier who commanded a desk, a preacher (he got better), a nonprofit executive and a government procurement analyst. He has a degree in History from Western Washington University. His nickname is Trailer Boy in homage to his childhood home on the outskirts of a small logging town.

Ken is a native of the Pacific Northwest and makes his home in Cornelius, Oregon, where he lives with his twin daughters.

Alex Wilson is a writer and actor in Carrboro, North Carolina. His stories have won the Eagle Award in comics and Writers of the Future in science fiction prose, with work appearing in Asimov’s, Analog, Outlaw Territory II (Image Comics), The Florida Review, and elsewhere. He was a writer on the critically acclaimed console video game Life is Strange: Before the Storm (Deck Nine/Square Enix). Publisher’s Weekly has praised his “sharp ear for dialogue,” and Locus Magazine called him a “promising new writer.” He’s originally from northern Ohio. He attended the last ever Clarion Writing Workshop in East Lansing, MI before it moved out to California.