Gruen was on the sixty-first master, and while his wisdom had grown steadily, he had worn very little. He was incredibly well-preserved–the palms of his three-fingered hands still sported the deep, swirling ridges that had worn to nothing in most people before they’d lived thirty years. Indeed, all of the myriad folds and ridges in his thick maroon skin were for the most part intact. His eyes were still housed in tight sockets, surrounded by thickly-ridged cheeks.

Besides the feet, the eyes were the greatest point of weakness for those who aspired to read the works of the masters. Ceaseless up-and-down eye movement caused the sockets to wear out, and eventually the reader’s eyes fell out. At that point they were forced to trace the carved words with their fingers. Friction quickly took its toll on the hands; readers rarely made it through one master’s teachings this way before their hands were ground to the wrist, and they were finished. 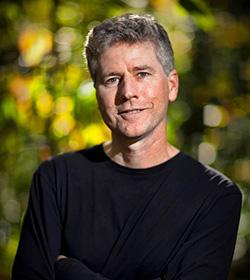 Will McIntosh is a Hugo award winner and finalist for the Nebula and eleven other awards. His most recent novel is Burning Midnight (Penguin Random House). His previous book Defenders (Orbit Books) was optioned by Warner Brothers for a feature film, while Love Minus Eighty was named the best science fiction book of 2013 by the American Library Association. Along with six novels, Will has published around fifty short stories in Asimov’s (where he won Reader’s Awards in 2010 and 2013), Lightspeed, Science Fiction and Fantasy: Best of the Year, and elsewhere. Up next is Faller, a wild SF adventure novel to be published by Tor Books. Will lives in Williamsburg, Virginia, with his wife, Alison, and twins Hannah and Miles. He left his position as a psychology professor in Southeast Georgia to write full time, and still teaches as an adjunct at the College of William and Mary.

Find more by Will McIntosh