The first time I met Stu, I was just a kid and there weren’t any lights hovering over his house. The last time I saw him, when I was grown and we both knew what life could be if you let it, there were. That’s the best way to start, I guess.

That first time, our dad piled us into our old Chevy wagon–the kind you took to drive-in movies with sheets on the seats and your kids in pajamas–and drove us to the north county, saying only, “Stu is an inventor. He’ll never see any royalties from his inventions because the Navy owns them, but he’s an inventor, the kind that made America great.”

How had he first met Stu? How does anyone in the Navy get to know a wide-eyed, crazy-haired inventor who wasn’t at all “strack,” who shouldn’t have been anywhere near the military but somehow was? On a Secret Project, of course. My brother and I–who were 10 and 6 at the time–were sure of it. Our dad and Stu had to be working on a Secret Project together. 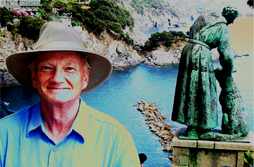 Bruce McAllister is an award-winning West-Coast-based writing coach, writer in a wide range of genres, consultant in the fields of publishing and Hollywood, workshop leader and an “agent finder” for both new and established writers. As a writing coach, he specializes in all kinds of fiction, non-fiction, poetry and screenplays.

Bruce’s literary and genre fiction has appeared in national magazines, literary quarterlies, college textbooks and ‘year’s best’ anthologies. His second novel, Dream Baby, a National Endowment for the Arts fellowship winner, was called a “stunning tour de force” by Publishers Weekly. His most recent novel, the autobiographical The Village Sang to the Sea: A Memoir of Magic, was a Cibils and Locus nominee. His fiction has been translated widely and received national awards and notable mentions in the New York Times, other U.S. newspapers, U.S. and foreign magazines and journals, and reference works for major publishers and literary presses. His poetry and experimental work have appeared in literary quarterlies and anthologies; he has co-edited magazines and anthologies; and his articles on popular science, writing craft and sports have appeared in publications like Life, International Wildlife, The Writer and newspapers across the country.