Blog of the Week:
The Angriest Rice Cooker in the World

Seated on a bollard, the man contemplatively removed his pipe, as if to tamp it down or relight it. Instead, he placed it stem down in the top pocket of his shirt, then reached up and pressed his fingers against his cheekbone and forehead. His face came away from his hairline, round behind his ears, down to a point just above his Adam’s apple. The inside of his mouth and much of his sinus were also part of the prosthesis, so only bare eyeballs in the upper jut of his skull remained — the rest being the black spikes and plates of bio-interfaces.

Cheel gaped. From another pocket, the man took some sort of tool and began to probe inside the back of his detached face. He put the prosthesis in his lap, then took up his pipe and placed it in his throat sphincter. Smoke bled from between the interface plates of his cheeks. His bare eyeballs swivelled towards Cheel then back down to the adjustments he was making. She suddenly realised who this must be. Here was the veteran who worked on the ferry. Here was one of the few survivors from a brutal war between factions of dense-tech humans. Not understanding what was impelling her, she walked out on the jetty and approached him. 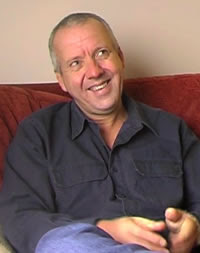 Neal Asher was born 1961 in Billericay, Essex, the son of a school teacher and a lecturer in applied mathematics who were also SF aficionados.

Prior to 2000 the Asher had stories accepted by British small press SF and fantasy magazines but post 2000 his writing career took flight. Pan Macmillan offered him a three-book contract and have now published many more UK, America, Russia, Germany, France, Spain, Portugal, Japan Czechoslovakia and Romania. The majority of his novels are set within one future history, known as the Polity universe. The Polity encompasses many classic science fiction tropes including world-ruling artificial intelligences, androids, hive minds and aliens.