The problem with working in the media is that I know writers who work for a weekly or bi-weekly magazine — even lead writers — can’t afford a Cadillac Escalade. Jeff, one of the main characters of Safety Not Guaranteed drives an Escalade. That kind of pulled me out of the movie a little.

But other than that, I enjoyed Safety Not Guaranteed, which is a little film about time travel. Supposedly.

What would you do if you came across this ad?

Wanted: Somebody to go back in time with me. This is not a joke. P.O. Box 91 Ocean View, WA 99393. You’ll get paid after we get back. Must bring your own weapons. Safety not guaranteed. I have only done this once before. 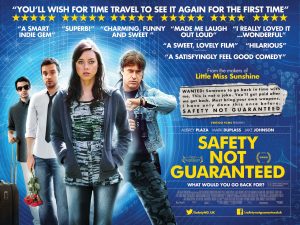 If you’re an intern named Darius who works for Seattle Magazine, when the story comes up at the morning meeting and Jeff the reporter says he wants to do it, you and your fellow intern Arnau tag along to a little coastal town called Ocean View to find out just what makes the advertiser tick.

After Jeff blows his chance with Kenneth, the guy who posted the ad, they decide to try a little sex appeal and send in Darius. The thing is, Darius is a bit of a knife-edge person. She’s sharp, quick, and very snappish. But she does manage to gain Kenneth’s interest, and thus begins Kenneth and Darius’s Training Montage Adventure — because Kenneth wasn’t kidding when he told her she’d need to be ready.

Meanwhile, in a forgettable B-plot, Jeff seeks out his old girlfriend from high school and also tries to get Arnau laid. We shall speak no more of this.

Eventually, Darius, Jeff, and Arnau learn that perhaps Kenneth isn’t quite the paranoid crackpot he seems to be… and maybe, just maybe, there’s something to his theories on time travel.

Safety Not Guaranteed stars Aubrey Plaza (Scott Pilgrim vs The World) as Darius. She’s basically playing a slightly nicer version of her character in that film. Joining her in front is Mark Duplass (The Mindy Project) as Kenneth. There’s no denying that these two have a weird sort of chemistry, but it was Duplass who I really bought into, probably because I’d had no exposure to him before this film. He completely sold me as Kenneth.

Darius’s co-workers are Jeff (Jake Johnson, New Girl) and Arnau (Karan Soni, Geo’s Pizza). Arnau had a few good moments, but it’s Jeff you really feel for, especially when he finally reunites with Liz (the gorgeous Jenica Bergere, The Drew Carey Show). The writing hamstrung him a little, but it was the B-plot so really we weren’t supposed to care that much about him anyway. The only other main-ish character in the film is played by Kristen Bell (Veronica Mars), but telling you who she is would spoil it. Don’t look it up on IMDB either. (Oh, there’s also Mary Lynn Rajskub from 24 as Jeff’s bitchy boss Bridget, but she’s a caricature character.)

Safety Not Guaranteed is based upon an actual ad placed in Backwoods Home Magazine in late 1997. It was written by John Silveira, and he explained the whole thing in 2010. The whole thing was intended as filler, he said, but for years he still received plenty of cards and letters. He said it was the opening to a novel he never finished, and I know there was at least one short-story produced in audio (Must Have Own Weapons” by Edward McKeown) using that ad as a springboard. It’s a pretty fertile landscape for fiction.

I found Safety Not Guaranteed to be a pretty enjoyable film. I laughed a bit, I groaned a bit, I said “that makes no sense” a bit, but overall I don’t feel like I wasted my time watching it. Plus, the climactic scene is pretty cool.

So… would you go back in time if you could? Maybe, after you watch this film, you’ll be more likely to say yes.

Note to Parents: This film contains profanity, drug use, and mild (very mild) violence. It should be safe for most teens, as long as you’re okay with bad words. Of course, you should use your own best judgment when it comes to your children.